In less than 24 hours, the WTA Finals will commence in Singapore. The culmination of the 2014 season, the event will showcase the world’s top eight players as they duke it out for the right to be named queen of the WTA Tour.

This year’s edition of the WTA’s year-end championships also featured the debut of a new competition: the WTA Rising Stars event. Four players, two from the Asia-Pacific Region and two from the “Rest of the World,” were voted on by the fans to compete in an invitational round-robin event prior to the tournament itself. China’s Zheng Saisai, Kazakhstan’s Zarina Diyas, the United States’ Shelby Rogers and Puerto Rico’s Monica Puig were voted into the event, and following round-robin play, Zheng (2-1) and Puig (3-0) will contest the final on Tuesday.

She might not be featuring in Singapore, but Italy’s Camila Giorgi also had a breakout season in 2014. While the 22-year-old had a few other notable scalps to her name in the past, the Italian found a measure of consistency – for her standards, anyway – in 2014. She reached her first two WTA finals in Katowice and Linz, qualified and upset Maria Sharapova en route to the fourth round at Indian Wells, helped Italy defeat the United States in her Fed Cup debut, and finished the season with an 8-3 record against the top 20. She also fell in the first round or in qualifying 10 times.

On court, the soft-spoken Italian cracked flashy forehands and blistering backhands, but something else of hers made headlines throughout the year: her outlandish outfits.

After out-slugging Caroline Wozniacki on Arthur Ashe Stadium at the 2013 US Open for the first statement win of her young career, Giorgi disclosed exactly why you won’t find her unique kits in stores – yet.

“My mom designs. She’s a fashion designer,” she said. “She has people who sew for her, of course, but my mom designs all my tennis outfits. We’re going to launch a company together, although we don’t have a name for it.”

“My mom doesn’t like everything being the same. She wants to change it up a bit. Put volados (ruffles) on dresses, things like that.”

If Claudia Giorgi wanted to get people talking, she’s certainly done that. In every tournament – nay – every match, Camila showcases another one of her mother’s unique creations. Although each kit is different, further journalistic investigation discovered that the Giorgis have shown favoritism towards specific styles.

When asked why she doesn’t gesticulate and vocalize like many of her peers, Giorgi responded, “I don’t like to be too loud.” The same can be said for many of her dresses.

The wise Elle Woods once said that “nobody looks good in paisley.” Giorgi proves this statement decidedly false. 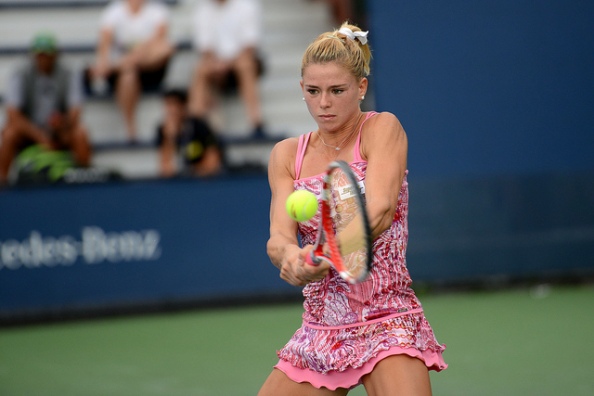 Giorgi at the 2013 US Open. Photo: Christopher Levy

Who says lace is just for wedding dresses? The dainty needlework is timeless, and can be easily adapted to fit every season and occasion. Even a tennis match.

Giorgi first burst onto the scene with a fourth round showing at Wimbledon in 2012, where she upset Flavia Pennetta and Nadia Petrova. Even the “predominantly white” rule at the All-England Club hasn’t hindered the Giorgis’ creative clout, and Camila’s also shown off these designs at Wimbledon’s tune-up events.

If Giorgi’s ranking – and profile – continue to rise in 2015, it remains to be seen if she’ll continue to showcase her mother’s original designs on court. Should a sponsor come calling, I’ve heard there’s a certain Adidas designer who also shows a particular proclivity for ruffles.