If Charleston crowds had their way, Madison Keys would have been the newly crowned Family Circle Cup champion. But Angelique Kerber was too tough, too consistent, and too good today, as she pulled off a brilliant victory, 6-2, 4-6, 7-5, to win her first career clay court title.

“It’s unbelievable,” Kerber beamed. “Everybody is so nice. I’m really happy about my game plan, about my game, which I really played good. I’m just happy to win the title here.”

The prestigious title is Kerber’s fourth overall. In 2014, she played in four finals but won none. Today adds to her record in finals, bumping it up to a more respectable 4-9.

“I mean it’s a great week for me here,” she continued. “I mean I had last year four finals and didn’t win one. So it’s great to win this tournament.”

Kerber and Keys had last played in the finals of Eastbourne last summer. That battle played out to a similar script: three knock-down sets with momentum shifts, and roaring fans after each exhilarating point.

“It was really close,” Keys said. “I missed a couple balls by the tiniest bit. I mean those kind of things can change a match.”

Kerber will rise to No. 14 when the WTA next posts its rankings, while Keys will rise to her highest ranking of No. 17. Even though Keys lost, she will move up to No. 6 on the Road To Singapore race rankings — a list that only charts player results for the 2015 season.

Neither woman considered herself a clay-courter, but Kerber does join a worthy lineage, now the third German woman to win Charleston since Sabine Lisicki in 2009 and Andrea Petkovic in 2014. Steffi Graf, though, still leads the way for all German women with four titles between 1986-89, and another in 1993. During her career, she won 20 consecutive matches at the Family Circle Cup. 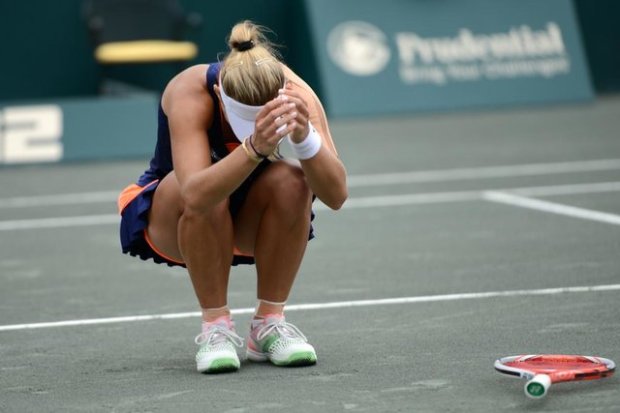 Kerber’s game was so spot on with accurate ball placement and gritty determination that she broke Keys in the first game of the match. Impressively, the American No. 7 seed had not been broken the entire tournament.

“I knew before that it will be a tough match,” Kerber admitted. “She’s a great player; and, she’s really dangerous on clay. She served amazing today. I was just trying to be aggressive. And she’s a talented player and for sure she have a great future.”

Keys conceded that she started slowly, wracking up early errors largely due to nerves. By the second set, however, she’d settled in to more consistent play and a more patient attitude. In the third, she went up a break to 4-1 that gave hope to an audience anxious for an American champion.

“It was a game here or there.” Keys said, her eyes looking as if she’d been crying. “And, I mean at the end she just didn’t make any mistakes, and I started making a couple more, and that was really the match.”

It was Kerber who truly upped her game when it matter. Had the momentum accelerated along Keys’ powerful style in the third, the story line and score would have read differently. Kerber used the words from Coach Torben Beltz to raise her game. 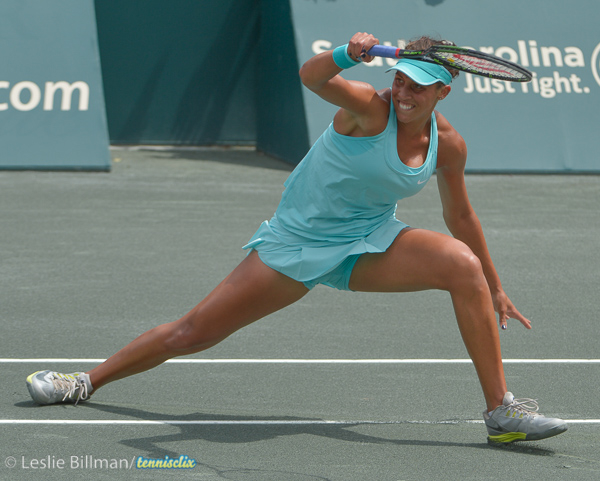 “He just said, just relax and play point by point,” Kerber said. “I mean just believe in yourself and just go for it. I try it because it was really hard to break her. I tried to focus on every single point like he told me. I think that was the best advice he gives me.”

At 5-games apiece, Keys double faulted, giving Kerber the green light to serve for the title. She closed it out at love, a convincing way to end a revitalizing week.

The win lifted Kerber’s spirits and confidence after weeks of uncertainty in her camp. Those insecurities stem back to 2012 when she split with Beltz and hired Benjamin Ebrahimzadeh. At the time, Kerber was ranked No. 5 in the world.

However, the new relationship began to unravel in the middle of 2014. She lost early at the US Open and lost both matches at Fed Cup in the fall. Kerber then went out in the first round of the Australian Open and the second round of Dubai. Victoria Azarenka, on her own comeback trail, pummeled Kerber in Doha, also in the first round.

Ranked No. 11 at the end of February after 143 weeks in the Top 10, Kerber announced the end of her coaching relationship with Ebrahimzadeh.

“I mean, to win the title here in Charleston after really difficult weeks that I had – I’m feeling great,” Kerber said with an authentic hint of gratitude. Obviously, she and Beltz have reconnected in a positive way.

Over the next few days, Kerber will fly to Sochi, Russia, for Fed Cup next weekend.

“I’m feeling a little bit tired because you go from hard to clay and you are running just much more than on hard. I have a few days off,” Kerber said. “I think we have a great team right now. We all are looking forward to the Fed Cup next weekend.”

From Fed Cup, players will head to Europe for the up-coming red-clay season. Women will converge on Stuttgart in a week and then travel to Madrid and Rome, plus other tournaments, before entering Paris and the second Grand Slam of the year, Roland Garros.

Will Kerber’s and Keys’ week in Charleston propel them to greatness, during this dusty part of the season?

“I’m just going to keep going with a positive attitude,” Keys remarked. “I think that was the message before every match. Stay positive and play well, and be a little bit more patient and also keep playing my game.”

“[Clay] was never my favorite,” Kerber said. “But it’s changed in the last year so I knew that I can play on clay. I think it’s good also for my game because I’m playing like defensive and also being aggressive. I’m looking forward to the next of the clay court tournaments.”

What did you think of the Family Circle Cup final? Sound off in the comments!

2 Comments on Kerber Locks Keys Out in Charleston