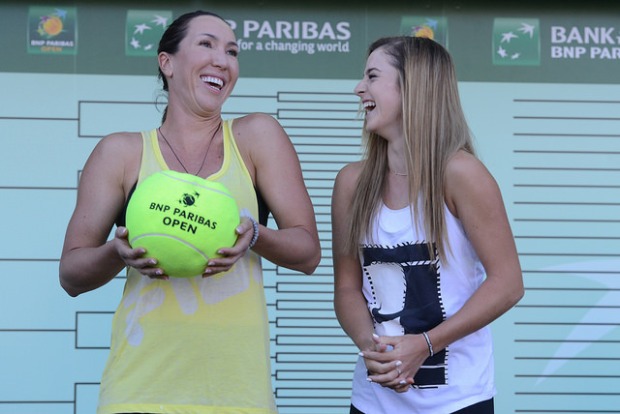 One year removed from the Raymond Moore episode heard ’round the world, tennis again descended on Indian Wells last week, and before proceedings even began, the WTA was again dealing with adversity in the desert.

Top seed Serena Williams was forced to withdraw from the tournament due to a knee injury, ensuring that Angelique Kerber would regain the top spot in the world rankings — after the American did not play a match in seven weeks since returning to World No. 1. With Maria Sharapova and Victoria Azarenka also absent (and Vera Zvonareva and Flavia Pennetta now retired), the 2017 BNP Paribas Open player field was missing four of its past eight champions.

Once the tournament got rolling, however, the women stepped up and delivered in a big way — in more ways than one.

On the first Thursday, qualifier Peng Shuai continued her renaissance of late, knocking off in-form Acapulco champion Lesia Tsurenko in an undersold grind, 6-2, 2-6, 7-5, which kicked off a run that saw her upset two seeds, Ana Konjuh and Agnieszka Radwanska, en route to the quarterfinals, where she pushed Venus Williams to the limit in a 3-6, 6-1, 6-3 defeat.

Speaking of that elder Williams — she and Jelena Jankovic rolled back the years on Saturday, as the American pushed through injury, rallied from 1-6, 1-4 down and saved three match points in a gritty second round win, 1-6, 7-6(5), 6-1. At the other end of the spectrum on Friday, 17-year-old US Open girls’ champion Kayla Day stunned Mirjana Lucic-Baroni, the No. 32 seed, Australian Open semifinalist and 18 years Day’s senior, 6-4, 5-7, 7-5. Her good form kept going in the second round, as she ground her way to a set against Garbiñe Muguruza in her second career match against a top 10 player before falling, 3-6, 7-5, 6-2. 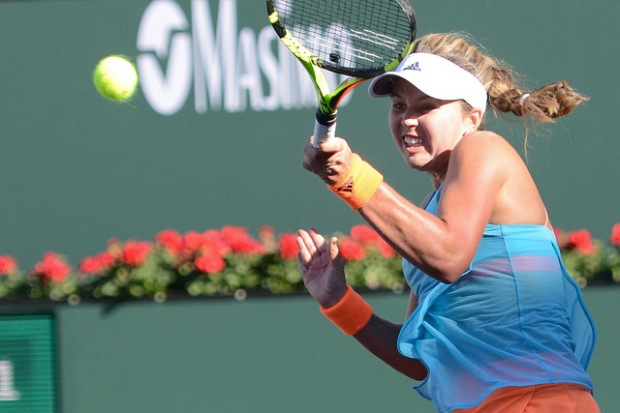 The kudos wasn’t just reserved for the players, either: the WTA’s upcoming team of umpires — Cecilia Alberti, Miri Bley, Kelly Thomson, Aurélie Tourte and Anja Vreg — were more than present over the course of the week, and took hold of proceedings in a Premier Mandatory event with aplomb.

(And the WTA’s veteran team of officials rolled with the punches — or, more accurately, shanked forehands — too. Keep doin’ you, Julie.)

By the end of the week, two Russians were left standing — No. 14 seed Elena Vesnina, in the midst of the best week of her career, and No. 8 seed Svetlana Kuznetsova, back in the championship match in Palm Springs in which she fell twice previously.

Before the tournament, Vesnina had yet to recapture the kind of tennis that brought her to the 2016 Wimbledon semifinals, but knocked off Kerber, Venus Williams, and the rolling Kristina Mladenovic in the penultimate three rounds to advance to her biggest career final.

Despite all the #narratives there for the taking, for the second year in a row, a lot of the talk on the final Sunday in Indian Wells was not about forehands and backhands — but it wasn’t for lack of trying on the players’ part.

When all was done and dusted, Vesnina and Kuznetsova put on a spectacular show: one that saw Vesnina strike 46 winners, and rally from *1-4 in the second set and 2-4* in the third, to defeat Kuznetsova and win her biggest career title, 6-7(6), 7-5, 6-4, in three hours, one minute — per the tournament, the longest championship match at the event since the WTA began keeping such detailed statistics since 2008.

That, for some, was precisely the “problem.”

@BenRothenberg so those fans in Europe and elsewhere who have organised their day around this men's match you feel this delay is acceptable?

The “delay” both Mark Petchey of Sky Sports and Nick Lester of Tennis TV reference wasn’t really one at all — as the men’s final was scheduled to begin after the women’s final was completed, “not before 1 PM” — a term traditionally used in tennis in regards to scheduling, and one that two veteran broadcasters should be quite familiar with.

The reaction online was swift.

@_markpetchey @BenRothenberg So if the women's F was over in 45 mins you'd be saying why can't the women have a more competitive F. Then again you're covering the ATP F

@_markpetchey @BenRothenberg what is NOT acceptable is the attitude of people who feel that men's tennis is the only important one.

@_markpetchey @BenRothenberg there was no delay ? This is ridiculous and wouldn't be a conversation if the men had played first

This is not the first time that a lengthy and dramatic women’s match has been disdainfully referenced as a disturbance or a disruption to the men’s tennis match that was to follow it. In 2013, Marion Bartoli was accused by Reuters of “hogging the stage” after a three-hour plus victory over Olga Govortsova on a rainy day at Roland Garros.

On a day when heavy rain shortened the program, the twitchy Bartoli, full of ticks and eccentric mannerisms, could have been accused of hogging the stage as she made men’s world number one Novak Djokovic wait for his grand entrance.

Despite long being held as the leading professional sport for women, it remains glaring obvious that even in the 21st century, that it’s hard for women’s tennis to win.

In the traditional post-championship press conference, Vesnina was essentially forced to defend the match of her life — something a man would never have to do.

“People will say, Okay, the next final was a little bit delay. Come on, guys. You know, you had one of the best match in the final you can have. It was, like, ups and downs — and the underdog won, you know, (smiling). I think this is the best scenario. I think, ’til the end, you couldn’t pick the winner. I think it was so interesting and exciting to see this final,” Vesnina said after the match.

“I’m proud of what we did with Svetlana today.”

As you should be, Elena — ladies, as you all should be — and we’ll keep fighting for you.