No party, no problem

American Madison Brengle cracks the Top 100 for the first time in her career on the back of a victory at the $50,000 newly-minted Red Rock Pro Open in Las Vegas. (RIP Party Rock Open and all of your leopard-printed, sequined magic.)

Brengle, best known for her dubious 0-for-26 record in qualifying attempts at Grand Slam events, was the #narrative killer of the week – defeating comeback kids Nicole Vaidisova and Kateryna Bondarenko in the quarterfinals and semifinals, respectively. She then defeated Michelle Larcher de Brito, 6-1, 6-4, in the final to claim her second ITF title of the year.

The 24-year-old has reaped the rewards of hard work over the past few months; she finished second to Nicole Gibbs the the 2014 USTA Pro Circuit US Open Wildcard Challenge standings, but was awarded one anyway. Playing in her first Grand Slam main draw since 2008 (she’s played five in her career as a wildcard), Brengle made the most of her opportunity and beat Julia Glushko to record her first Grand Slam main draw win. Per the WTA’s Kevin Fischer, this week marks the most American women present in the Top 100 since 2005. Not bad, #merica.

After retiring in the first round at the ATP World Tour event in Metz two weeks ago, World No. 24 Philipp Kohlschreiber thought it’d be wise to take a wildcard to play in an ATP Challenger Tour event in Orléans, France, last week. The German, the highest-ranked player in the field by FIFTY (yes, 5-0) places, promptly lost in straight sets to Tim Puetz, the second men’s player to ever been “golden setted” in the Open Era. 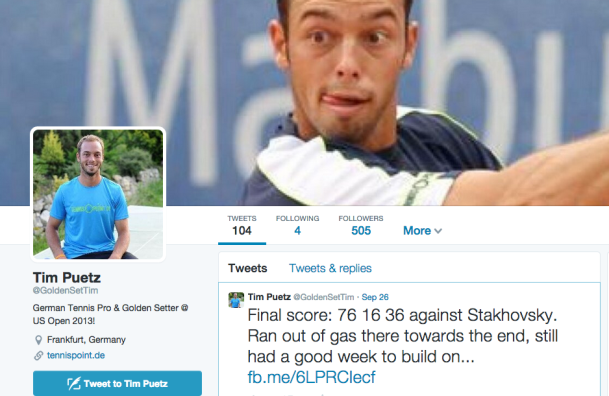 Puetz defeated his countryman Kohlschreiber in the second round, 7-6(3), 6-1, and lost to eventual champion Sergiy Stakhovsky in the quarterfinals.

Great Britain’s Naomi Cavaday, who retired from the game in 2011 only to return earlier this year, won the first title of her comeback at the $10,000 event in Sharm El Sheikh, Egypt last week.

Cavaday, whose career-high ranking was No. 174 before her retirement, is perhaps best known for a match that she lost. As an 18-year-old in 2007, Cavaday gave Martina Hingis all she could handle on Court No. 2 at Wimbledon, holding match points before falling 7-6(1), 5-7, 0-6. She played just three main draws at Wimbledon in her career, losing in the first round each time.

In addition to struggling with injuries, the Brit battled depression and an eating disorder over the course of her career, which led to her retirement from the game at age 22. She took up a position as a coach at the Lawn Tennis Association, but received a wildcard to compete at the $50,000 event in Nottingham in June. Cavaday dropped just one set en route to the title, defeating top seed Barbara Haas in the quarterfinals, and No. 2 seed Ana Veselinovic in the final.