This is Yulia Putintseva.

To call the ethnically Russian, fiscally Kazakh teen a character is an understatement of dramatical proportions. Putintseva burst onto the scene as a junior terror who appeared to be on the fast track for a PhD in “Keepin’ it Real.” On the comeback trail after a mid-summer injury stunted her progress in 2013, the Polyglot Princess’s latest successes – a second career WTA quarterfinal and an upset win over Osaka’s No. 6 seed Heather Watson – have drudged up nostalgia for what once was, and what might be again.

A former Top 100 tyrant, Putintseva has an attitude made for reality TV, and the nineteen-year-old appears to constantly channel former Flavor of Love villain and reality Queen Tiffany “New York” Pollard. A multimedia analysis yields some interesting similarities between the young teen and the HBIC:

1. Putintseva dropped out of junior tennis as fast as she could. 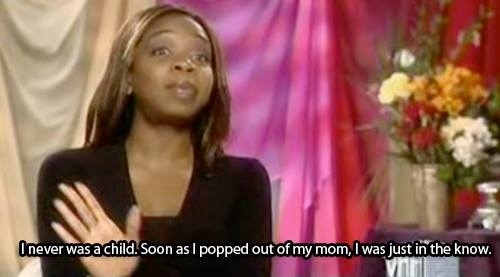 2. She’s not afraid to let people know what she thinks.

3. She refuses to be intimidated by authority.

6. Both grasp the importance of staying calm…

7. …but realize that they’re works in progress.

8. Above all, they both abide by the golden rules:

1 Comment on Yulia P, “HBIC:” How the Teenage Dynamo is the “New York” of Tennis