British Fed Cup Captain Judy Murray got the children of Stornoway “Set4Sport” during a Tennis on the Road taster session.

Raising a pair of Grand Slam champions, Judy Murray is not only the mother of Andy and Jamie, but the British Fed Cup Captain is also hoping to lay the groundwork for the future of Scottish tennis. The veteran coach and Strictly Come Dancing contestant has partnered with Royal Bank of Scotland to unveil her latest venture, Tennis on the Road.

Debuting in September, Tennis on the Road introduces cities all over Scotland to Murray’s own Set4Sport, which teaches parents the games she played with Andy and Jamie played as they grew up. Using low-cost household objects, Murray utilized these games to teach her children the fundamentals of athletic activity, developing their agility, balance and coordination – the “ABCs” of sport – in the process.

“Tennis on the Road does exactly what it says on the tin,” Murray said. “It takes tennis around Scotland into places where there is little or no activity. Our aim is to grow the game by inspiring participation and developing the skills of those who will deliver it.”

Looking to spread a love of sport to the farthest reaches of Scotland, Murray and Royal Bank of Scotland kicked things off at the Bunabhainneadar tennis court on the Isle of Harris, the most remote tennis court in the British Isles. The tour then moved to Stornoway, where Tennis on the Road presented a successful taster session for the local youth. With the project coming on the heels of son Andy’s Wimbledon triumph, Murray feels the country is ripe for wider involvement in tennis and athletics at large.

“We have an amazing opportunity to capitalize on Andy and Jamie’s success and really increase participation across the country.” 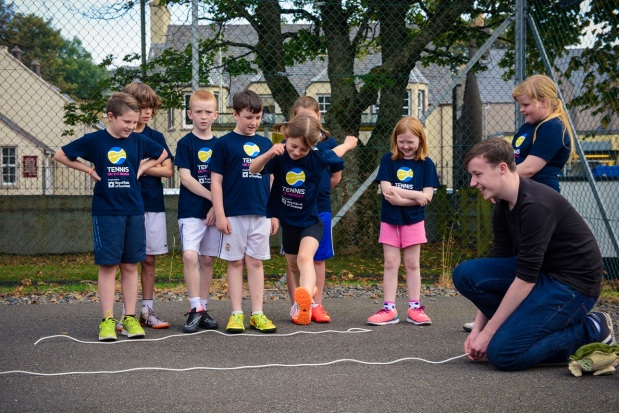 For Royal Bank of Scotland, Tennis on the Road represents a new and exciting chapter in its partnership with the Murray family. A supportive force since the younger Murray’s junior days, RBS is wholeheartedly behind the family’s latest endeavor.

“We’re pleased to be continuing our relationship with Judy and extending the positive impact that Set4Sport has had within communities across Scotland,” said RBS Sponsorship Manager Martyn Wilson. “Tennis on the Road not only exposes children to sport, but it is designed to build capacity in coaching at all levels so that the sporting opportunities in schools, clubs and communities are sustainable for the future.”

Tennis on the Road rolled into Cumbernauld earlier this month, unveiling a three-day roadshow for over 150 parents, coaches, teachers, and volunteers. Home to around 50,000 people, Cumbernauld is an area primed for tennis thanks to Tennis Scotland and North Lanarkshire Leisure, whose combined efforts have helped to integrate tennis into the school curricula of more than 4,000 children. Doc McKelvey, Tennis Scotland’s Head of Development, believes Tennis on the Road‘s uncomplicated approach and focus on fun will be the keys to its continued success.

“The roadshow in Cumbernauld was a great success with children, parents and teachers all getting involved in the fun. The activities are simple and easy to run yet great for starting out and progressing with tennis. We look forward to the next stop on the tour and bringing tennis to existing and new audiences throughout Scotland.”

Though her eyes are on the Strictly prize, Murray is looking forward to getting back on the Road later this year, taking the tour into a new city, racquet in hand.

“My team is hard at work planning the next roadshow in November‎ and I’ll be very hands on when my dancing cha-cha-challenge is over!”

To learn more about Tennis on the Road or if you are interested in getting the FREE roadshow to your local community, please go to www.tennisontheroad.com!