Serbia’s Jovana Jakšić was eight years old when a deep love for tennis took root. Faced with what ended up being a life-defining realization, she responded as any child would.

“There was a tennis camp in the club where [my father] played and I really wanted to start playing tennis,” she recounts on her website. “I said that to my parents but they thought I wasn’t serious…I started to cry and at that moment they realized that I was serious about tennis. I was the happiest person in the world the first time I held a racket in my hand.”

She cried again at twelve, this time tears of determination.

“I played one match against the girl who was the top seed. On one point she cheated – we didn’t have umpires at that time – and I was really, really angry. I came out of the court crying and I told my parents that I wanted to practice every day. I said that in one year I wanted to beat them all…and that’s what happened. After that match, tennis became my life.”

Now 21, Jakšić has rocketed up over 300 spots in the WTA Rankings since the beginning of 2013. She started small, cutting her teeth on the ITF Pro circuit. Where one traditionally thinks of a tennis player as a compulsive country-hopper, the Serb strategically settled where she could rack up wins and build her confidence, winning seven of her fourteen ITF singles titles in the resort city of Antalya.

“I love Turkey. I love the people, the culture, the food. There are some similarities with Serbia and I feel at home there,” Jakšić told The Tennis Island in an interview just before commencing a $50K on Captiva Island. “When you get a good feeling about a place and feel comfortable, it brings out your best tennis.”

The Serbian No. 5 became equally comfortable at the WTA International event in Monterrey, Mexico. Fresh from a three week stint in Antalya – where she won two titles and 14 of 15 matches played – Jakšić qualified for the main draw in her WTA Tour debut in 2013, dancing into the second round after a 7-6 in the third win over former No. 31 Vera Dushevina.

It was in the next round that Jakšić captured the hearts of the Mexican crowd. Employing her “all-out attacking” game style, she pushed then-No. 12 Maria Kirilenko to three sets, and showed off some impressive moves while the Russian took a mid-match bathroom break:

Though playing just one more WTA main draw that year, her strong results at ITF events – five titles in all – guaranteed a finish just inside the Top 150. Having begun the year ranked No. 420, Jakšić was pleased with her rapid rise, and eager for more success.

“My ranking took a big leap in 2013 so I knew that this year would be a lot harder and that the journey just gets tougher the closer you get to the top.”

Continuing her transition from the minor leagues this season, Jakšić played more than triple the number of WTA tournaments from the year before, but is quick to credit the ITF experience as crucial for her development as a player.

“The ITF Pro Circuit is great and I’ve really enjoyed competing on it over the past few years. The organizers do a great job of putting on fantastic events and looking after us. Plus there’s a lot of enthusiasm at that level. It can be a tough grind, but it’s where we learn how to be a professional.” 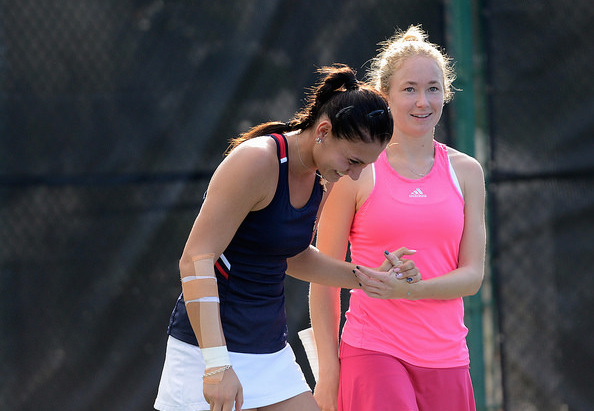 Returning to the site of her big league breakthrough, Jakšić turned Monterrey upside-down in 2014. Knocking out No. 7 seed Karin Knapp – who had just pushed Maria Sharapova to the longest match of the season – the Serb kept on winning, knocking out a pair of qualifiers before earning a thrilling victory over veteran Kimiko Date-Krumm to reach her first WTA final.

“It was an unbelievable tournament for me and I will remember it forever. It puts a big smile on my face when I think about it now.”

Across the net for the biggest match of her career was friend, compatriot, and No. 2 seed Ana Ivanovic. Jakšić found herself in the first all-Serbian final in WTA history, an achievement of which the World No. 115 is deservedly proud.

“It was a dream come true for me and to make history by playing Ana in the first all-Serbian final was the icing on the cake. The crowd there was amazing and really made me feel like I was Mexican. I can’t wait to go back next year.”

Growing up at a time when players like Ivanovic, Jelena Jankovic, and Novak Djokovic were all making big waves in the sport, Jakšić believes the precedence of excellence set by her peers adds no extra pressure, and can only yield positive results.

“I am very lucky to come from a country with such great players. They are all amazing and a great inspiration to me. Ana in particular has been really supportive and is always offering me help and advice.”

Following her runner-up performance in Mexico, Jakšić gained direct entry into her first two Grand Slam main draws. Losing a pair of three-setters to experienced players drove home just what is required of a WTA stalwart.

“The level is definitely a lot higher. You know every match is going to be tough and it’s really important to keep a consistent level from start to finish. That’s something I have learned the hard way in two really tough losses in matches that I could have won. It was a huge moment for me; the reason I play tennis is for experiences like that. Sometimes you learn more in losing than you do in winning, and I am determined to do better next time!”

Traveling with mother Danijela, who coaches her alongside childhood instructor Dean Dermanov, the WTA Rising Star has already attracted attention from some of the sharpest eyes in the sport. The Serb is represented by PR Manager Katie Spellman, who also works with Wimbledon champion Petra Kvitova, and was just signed by Agent Atleta Ltd. (located near her new Las Vegas training base) in October. Planning to give it all during the off-season, Jakšić aims to improve her serve and movement with one goal in mind: a Top 100 ranking.

“I’m really happy that I’ve been able to make more progress and next year I’m determined to break into the Top 100. Of course, I expect a lot from myself but I try not to put too much pressure so I can enjoy my tennis.”

Jaksic has a big personality and isn’t afraid to let loose on the court. Photo: Christopher Levy

Off the court, Jakšić can be found online, replying to fans, posting pictures, and chronicling her busy life on Tour.

“I love using social media and think it’s a great way to interact with people and fans from all over the world. I love Facebook, Twitter and Instagram and just try to have fun while keeping everyone up to date on where I am and my results.”

For all she has already achieved, Jovana Jakšić refuses to become jaded by the daily grind of the game, and retains that same childhood passion that brought her to tennis in the first place.

“I am so lucky and grateful to be a professional tennis player. I can’t imagine doing anything else.”