Caroline “Sunshine” Wozniacki shone bright this summer. Can she keep it up? Photo: Christopher Levy

It has been an eventful year for Caroline Wozniacki. For much of her season’s first half, the Dane failed to find her footing on-court and faced further struggles off it. But by summer, the 24-year-old had begun a surge back up the rankings. SHe reached her second Grand Slam final, and qualified for the WTA Finals in Singapore. Indeed, the second half of 2014 was all about Wozniacki and best friend, World No. 1 Serena Williams; the two conspired to play some of the best matches of the year, saving some of their best for Singapore. David Kane joins René Denfeld to discuss Wozniacki’s year – her past, present, and future – and what 2015 might have in store for her.

René Denfeld: I’m going to be honest here – this time last year I did not think Caroline Wozniacki would finish 2014 ranked inside the Top 10. Fast-forward to May and I was beginning to think we might see her outside the Top 20 sooner rather than later. How about you, Dave?

David Kane: I think a sign of how truly bleak things had gotten for the former No. 1 was how few people were thinking about her at all. Had she managed to fall out of the Top 20, it might have been a story – the nadir of a protracted fall from relevance – but for all intents and purposes, the story had already been written. She who had reached the top of the game on the back of maddening consistency, razor-sharp competitive instincts, and a comparatively weaker overall field had been ousted. She who attempted to usher in a culture of friendship on the WTA had found a best friend in fiancé Rory McIllroy. She who had been pressured to fire her father in favor of a new coach thought she knew better, and now appeared to be paying the price. What changed in 2014? The field hasn’t really become weaker in the last two years. Wozniacki herself hasn’t become the offensive powerhouse – or even the offensive counterpuncher – that those around her deemed necessary she become to guarantee further success. I have a theory, but I’ll let you go first.

RD: To put it simply: the confidence is back. For Wozniacki, that truly makes a world of difference. However, what’s remarkable is how she was able to find that confidence at what was arguably the lowest point in her career. After her first round loss to Yanina Wickmayer in Paris, the Dane began putting together solid results on grass, but it was her title run in Istanbul that made me sit up and notice. She didn’t have to beat any top players that week, but the way she swept past Kristina Mladenovic and Roberta Vinci looked a lot like the player you could once bank on to make the late stages of hard court tournaments. The former World No. 1 still doesn’t hit winners for fun, nor does she bully opponents off the court with vigorous groundstrokes – she’s still a retriever by and large – but a confident Wozniacki will retrieve with more intent, serve better and take opportunities to control rallies when possible.

DK: A lot of the talk around Wozniacki – even at her peak – centered on the perceived necessity of change. She needed to become more aggressive. She needed to hit more winners. As she began to lose more important matches to more powerful opponents, the talk got louder. The easiest comparison is to another former No. 1, Jelena Jankovic. But where the Serb at least attempted – however begrudgingly – to add bulk to her game, the Dane was never more passive than in her efforts to ratchet up her aggression. The closest she got to realizing that potential came at Wimbledon in 2012 during a highly entertaining, but ultimately disappointing, first round match against eventual quarterfinalist, Tamira Paszek.

Whether she realized it or not, committing to the New York City Marathon was perhaps the direction she needed all along. Rather than focusing on weaknesses, why don’t we, as a tennis community, encourage athletes to play to their strengths? Marathon training triggered a fitness overhaul for Wozniacki, who emerged in time for the Emirates Airlines US Open Series looking close to a physical peak. In better shape, she was suddenly able to play the game she loves, to the tenth power. The gets she was able to dig out against Maria Sharapova under the hot Flushing sun were reminiscent of those we saw when she once led the field. More impressive than anything was her persistence in pushing current World No. 1 and good friend, Serena Williams. What do you make of that rivalry, if we can call it that?

RD: The Serena question is an interesting one. I think her week of fun with Williams in Miami definitely played a big role in catalyzing Caroline’s comeback. Within a month of her ended engagement, she lost early at the French Open, had a short vacation with Williams and then returned to Eastbourne, looking more like the reinvigorated Wozniacki we began to see towards the end of the season. 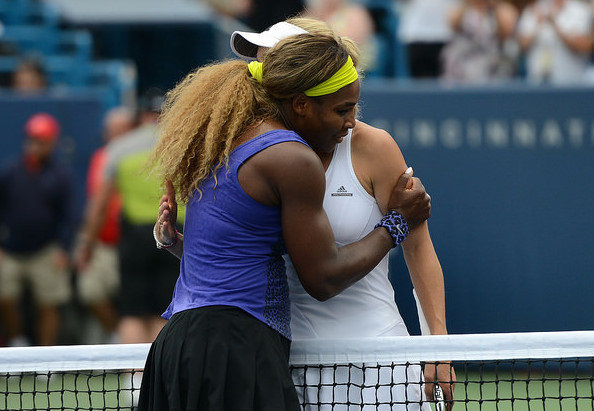 I think we can definitely call it an on-court rivalry, and an intriguing one at that. It’s just unfortunate that least compelling match occurred on the biggest stage – the US Open final. The Singapore showdown was their closest – and best – match of the year, and it certainly stung the Dane to come so close yet suffer a fourth loss to Williams in three months. It’s often the case that good friends off-court struggle when it comes to competing against each on court (see: Dominic Thiem and Ernests Gulbis). But as Wozniacki and Williams grew closer over the year, the World No. 8 continued to lay her cards on the table when facing her BFF, even if she didn’t cross the finish line. Question is: can she do the same next year? Let’s just hope it won’t require BBM blocking or Twitter unfollowing. What are your thoughts on “Carena” and Woz in 2015, Dave?

DK: What I’ve always found compelling about Serena – and this does round back to Caroline, I promise – is how the American admits to struggling to retain her trademark focus when playing a friend. We saw this first play out against Victoria Azarenka, who had been Williams’s closest competitor for much of 2013. But the difference there – and this is what makes things worrisome for Wozniacki – is that Azarenka was actually able to win a few matches; though she failed to beat Williams at a Grand Slam tournament, two fairly high-stakes finals went the Belorussian’s way. This could simply speak to an evolution in the American, who is perhaps now able to balance friendships with her ever-burning competitive fire. Or does it speak more to Wozniacki who, for all her improved strengths, still has weaknesses against the best in the game?

The best take-away that the Dane should remember heading into 2015 is how she continued to create opportunities, despite some disappointments in the end. Happening to play well at the same time as the game’s best doesn’t typically smack of good luck, but there were plenty of openings in the schedule that could persist in seasons to come. Should Wozniacki remain in the mix, her hard work might pay off. For 2015, it comes down to this: buy, sell, or hold?

As for 2015: The Dane has all of 900 points to defend throughout the first five months of the year. I’ll be extremely bold here and BUY. There is a plethora of hard court tournaments until April and surely with her improved ranking and seeding, she’s going to stockpile points on her best surface. The question of sell or hold will come up again around Wimbledon – and even though it’s pure guess-work right now, my long-term bet is to hold. To be clear, there’s a very real possibility of Caroline Wozniacki winning a Grand Slam in 2015. Four of the last six major titlists put their hands on the trophies without facing Top 10 opposition, and so Wozniacki could very well exploit a weakened draw – or even romp through a rock-solid one. After all, she did manage to defeat three Top 10 players on the trot in Singapore.

DK: Where your analysis is more quarter-based, I’m inclined to stamp HOLD over the entirety of her next season. In lauding her second half’s many highs, there were a few bumps in between. The same player who pushed Serena Williams to the brink also lost straight set matches to Camila Giorgi and Samantha Stosur. Though her Tokyo loss to Ana Ivanovic was ostensibly more forgivable, the fact remains that it’s symptomatic of Wozniacki’s one “major” issue: a big-hitter having a good day can easily – and quickly – hit through the Dane’s defenses. In Singapore, it was Wozniacki having most of the good days. But at a Grand Slam tournament, it only takes one Giorgi in seven matches to unhinge the whole operation. With few points to defend, it’s hard to bet against a rise in the rankings. Whether she’ll truly shine in 2015 remains to be seen.