Tactics Tuesday returns – and it’s supersized much like a day of tennis in Australia.

After taking Lucie Safarova out in a marathon three-set match, Sam Stosur was facing another Czech OVA in the second round of Sydney in Barbora Zahlavova Strycova. The 28-year-old has been making continuous progress over the past 12 months and after pushing Caroline Wozniacki into a third set in Auckland, she took another set off the Dane before the World No. 8 retired.

From the outset, the 2011 US Open champion was able to create several break chances but failed to capitalize. The Aussie would follow up solidly-constructed points with shanked forehands, routine misses and – as she herself admitted – was all over the shop for most of the match. Zahlavova Strycova, on the other hand, played a solid, much more consistent opener. The only time the momentum looked ready to shift was when the Czech failed to serve things out as Stosur began winding up her forehand to greater success.

The eventual tie-break, however, turned into a mare for the Gold Coast native as she lapsed into previous patters: falling onto the back-foot, not taking the initiative and committing numerous unforced errors.

For all the World No. 20 wasn’t able to do on the day, her slightly lowed ranked opponent mixed up her game much like we’ve seen in her resurgence. The Wimbledon quarterfinalist snuck into the net, targeting Stosur’s backhand but unafraid to trade blows with the heavier forehand either, which persistently landed short, particularly when she was on the run. A whacked racquet aside, Zahlavova Strycova remained fairly calm (by her standards anyways) and once she broke Stosur in the second set, she never looked back. The world No. 26 held on to her serve – a vastly underrated shot given her stature – and broke once more to ensure her quarterfinal berth.

In his highly-antricipated return from wrist surgery, Juan Martin Del Potro was pitted against Sergiy Stakhovsky. There was much speculation over the Argentine’s condition coming into this event, whether he had recovered sufficiently and to which extent he was going to modify his game to favor his still-injured left wrist.

Overall, the 6’5″ Tower from Tandil looked as good as anyone could following another ten-month injury lay off, relying on his heavy serve and trusty big forehands to quickly 1-2-punch his way through service games. Particularly in the first set, Stakhovsky struggled living with the weight of shot coming off of the Argentine’s racquet and found himself broken early to start and unable to recover the deficit. The second set went with serve and after going down 0-2 in the tiebreak, Del Potro switched gears to win seven of the next nine points, firing two aces along the way.

Whilst his forehand already showed glimpses of its former glory, the 26-year-old very mixed up the backhand between slice and topspin, though the latter looked understandably tentative at times. Against Stakhovsky, it was often enough to keep him in rallies to wait for an opportunity to pounce with his forehand. The real test will come against players more cunning from the baseline and further, how Del Potro’s wrist will deal with back-to-back days of competitive play.

Irrespective of that, it was good to have the Argentine back, and looking in better form than expected.

The puzzle continues for Sloane Stephens. After last week’s loss to Lauren Davis in Auckland, the American found herself getting breadsticked out of a tournament once again, this time at the hands of Heather Watson in Hobart. 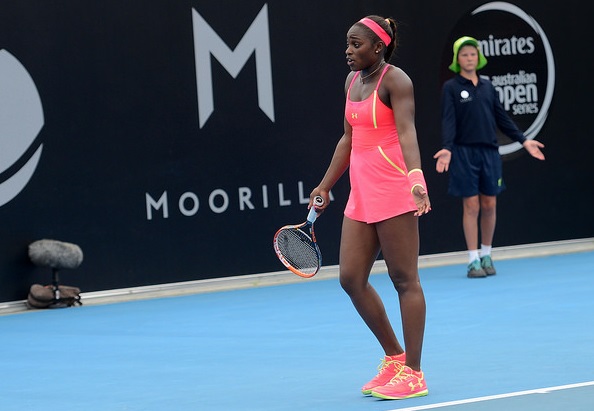 Through most of the first set, it was a meeting on eye level; Stephens had a look in almost all of Watson’s service games, but when it came to the big points she was never able to execute, often having her feet stuck to the ground. Despite having game points to go up 4-3, the 21-year-old ended up losing her service game with an almost symbolic double fault, and responded by slumping her shoulders. The former Australian Open semifinalist ended up losing nine of the next ten games to a much more present, agile, and solid player off the ground. It was a performance that was almost a blueprint of every criticism ever lobbied at the American, particularly once she went a break down in the first set.

I wrote about Stephens in the off-season, trying to understand and shed some light on the past two years of her rather enigmatic career. There are still question marks on how much she was able to train during the off-season, having spent a fair amount of time nursing an injury. But aside from physical aspects, the first two weeks of the 2015 looked a lot like any non-Slam week from Stephens’s past two years.

The biggest question? How long will new coach Nick Saviano be patient with the complex young American?

When Kerber and Gavrilova faced-off in Brisbane, the young Russian-Australian made a strong push in the second set, but the more experienced German ultimately prevailed in two. This week, the pair met again in the second round, so it would be interesting to see how much Gavrilova had learned from the previous encounter.

After several rain delays and long preceding matches, Kerber and Gavrilova didn’t even take court until well past midnight. That’s when the madness really began. The former junior prodigy came out far more aggressive and focused than in Brisbane, viciously returning serve and fighting tooth and nail on her own service games. The World No. 9 was visibly annoyed with how well her opponent was hitting the ball, asking her coach Benjamin Ebrahimzadeh what she was supposed to do when “she [Gavrilova] is smacking winners like a lunatic.”

After two topsy-turvy tiebreak sets, the latter of which saw Gavrilova come within two points of winning the match, the pair headed into a 3rd set at 2.30am, both visibly exhausted. The World No. 187 went off-court mid-set for a quick relief-break; upon returning, it seemed like her intensity dropped off, allowing her veteran opponent to quickly hold serve and break to lead 5-2. The match proceeded to go on serve and at 3.10am, Kerber was able to close out this very late night contest.

The sheer drama, the ridiculousness of both women even being sent out at 0.30am, and the stellar shotmaking: for many reasons this was, quite probably, one of the matches of the year thus far. Kerber was visibly annoyed with everything and proceeded to amp up the aggression, shrugs, sarcasm and eye-rolls. Gavrilova, in stark contrast, was hyper-motivated, [Pam Shriver]so emotionally demonstrative[/Pam Shriver] and full of belief in her shots until about the middle of the third set.  She might have drawn the short stick for the second time in succession, but it’ll be very surprising if there isn’t more to come from the 20-year-old this year.

Though he eventually won the second set, Nick Kyrgios decided to hit a mid-court tweener at 5-5 in the tiebreak, which landed in the net and gave his opponent match point.

What tactics have you enjoyed seeing through the Australian summer? Sound off in the comments!

1 Comment on Tactics Tuesday: Five Impressions from Down Under