René Denfeld profiles the rise of Czech women’s tennis ahead of an all-Czech final in Sydney – the first of 2015 and likely not the last.

There was every chance for the women’s event in Sydney to be one the biggest deja-vús in recent tennis history. In the top half of the draw, unseeded Karolina Pliskova faced last year’s finalist and No. 5 seed, Angelique Kerber. In the bottom half, second seed Petra Kvitova saw herself in a rematch with qualifier and defending champion Tsvetana Pironkova. The enigmatic Bulgarian could have easily lifted the trophy again with an identical sequence of victories to 2014: No. 2 Kvitova in the semis and No. 5 Kerber in the finals.

But the two big-hitting Czechs had other plans.

When the Czech Republic’s No. 1 and No. 3 enter the court in Sydney tomorrow, it will be a battle of big serves and massive groundstrokes. Both two-time Wimbledon Champion and rapidly Rising Star are not going to leave a stone unturned when it comes to searching for opportunities to land the first strike. Pliskova, who took two titles last fall, has only dropped one set en route to the final, handing out three bagel sets along the way and demolishing Kerber with 32 winners in less than an hour. Kvitova dropped a set to Australian wildcard Jarmila Gajdosova, and though she was slow out of the blocks against Tsvetana Pironkova in her semifinal, she easily outhit the former Wimbledon semifinalist to reach the finals.

While it will be a battle of ballstriking, this final will also indicate whether Pliskova can make a valiant push to further shake up the hierarchy at the top of  Czech women’s tennis. For the past few years, Kvitova and Lucie Safarova have been the two biggest and most successful names in their country, but since Wimbledon, more and more compatriots have begun to shine on the court. Pliskova, the current world No. 22, is poised to enter the Top 20 by virtue of reaching the finals; with a victory over her famous countrywoman, she could put her name on the map and become more than just a dark horse at next week’s Australian Open. The 22 year old already pushed Kvitova to three sets in Wuhan a few months ago.

No other nation has more athletes in the WTA Top 20 than the small country in central Europe. Along with the young guns and established veterans, the late-blooming, sometimes temperamental, always entertaining Barbora Zahlavova-Strycova is already knocking on the door to follow Pliskova as she’s bound to climb to No. 21 after her Sydney-quarterfinal showing.

In today’s post match press conference in Sydney, Kvitova was asked why her country was doing so well; at first, she laughed and claimed she doesn’t really have an answer. Eventually she remarked:

I think the tennis is very popular in the Czech Republic [..] and I think we have plenty of history in our tennis. It is how you said already, Lendl, Kodes, Navratilova, Novotna. It’s a lot of great players. That’s why probably we just start to play. Because my parents like to play tennis so I started as well.

Names like Kodes, Lendl, Mandlikova, Novotna, Korda and last but not least Navratilova have a combined 35 Grand Slam titles among them in the 80s and 90s, inspiring entire generations, including last year’s Wimbledon champion, to pick up a racquet. Much like neighboring country Germany or France, there is a brimming league competition in the Czech Republic with a very active club system. Pliskova herself spent her off-season training in Prague, then competing in club tournaments to test her match fitness. Navratilova has cited it many times as one of the reasons why her compatriots become tougher; the leagues encourage playing an above-average amount of practice sets, fueling competitive fire. With two Fed Cup trophies within the last three years, it’s difficult to argue with the 18-time Slam champion.

And it doesn’t end there. More promising young women from the Czech Republic abound, all of whom are likely making waves in 2015: 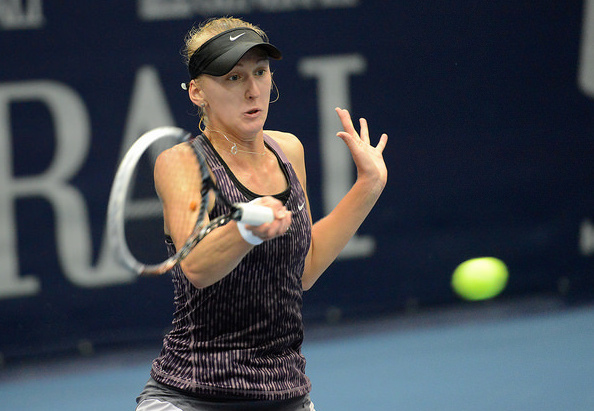 The 20 year old began 2014 outside the Top 200, but courtesy of a big run through qualies into the second week of Wimbledon, Smitkova cracked the Top 100 and capitalized on her improved ranking, enjoying solid results ever since. The young Czech doesn’t have a lot to defend until June and played Kvitova tough in the Shenzhen quarterfinals.

However, she has also shown a tendency to bubble over on court, as seen when she broke down in tears after losing to Meusburger in Bad Gastein last summer.

Hailing from Smitkova’s hometown of Hradec Kralove, Siniakova climbed from No. 173 to No. 83 in 2014 and put together a string of great results at the end of last season, making the semifinals of Moscow as a qualifier and winning the ITF 50k in Nantes. There are still a couple of technical hitches in her game, but when she has time to set points up, she can dictate play efficiently, even if her groundstrokes don’t look the most economical at all times.

At 18 years of age, there is still plenty of room for streamlining Siniakova’s groundstrokes and improving her second serve. 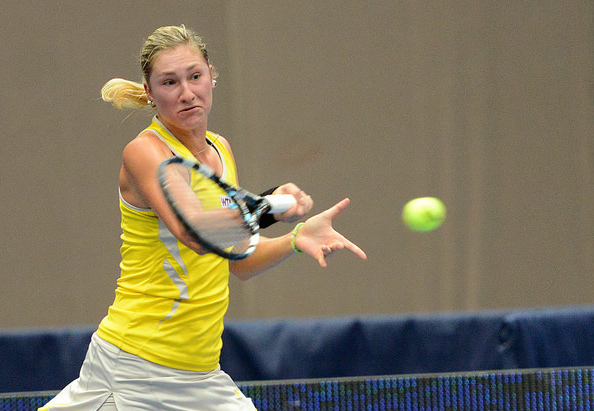 Allertova is certainly the newest kid on the Czech bloc: so new,  the WTA still don’t have anything up on the 21 year old beyond her age. Allertova began last season at No. 368 and racked up a massive 7 titles on the ITF tour, making a breakthrough WTA in Luxembourg, up-ending Sabine Lisicki and Varvara Lepchenko on her way to the semifinals as a qualifier. Allertova isn’t too dissimilar to Karolina Pliskova; she stands at 1.80m and is thus able to serve big and hit big off of both wings. But her game is still in the process of clicking, and a solid retriever like Annika Beck is easily able to draw errors from the Czech’s racquet.

Having climbed over 300 ranking spots within 12 months though, it’s hard to believe that the upward trajectory is going to come to a sudden halt, especially since Allertova hasn’t played a single Grand Slam main draw match yet.

There’s certainly no shortage of Czech talent in the Top 100. On the contrary: it looks like it’s bound to increase within the next few months. Who knows – perhaps Karolina’s twin sister Kristyna will also start surging up the rankings soon, as well. A little further down you have Jana Novotna-coached 19 year old Barbora Krejcikova, who has already begun to make steady progress.

And let’s not forget the reunited “Silent Hs” –  Lucie Hradecka and Andrea Hlavackova – who will no doubt be in the hunt for more doubles glory.

The all-Czech Sydney final might be just the first of several we’re going to see this year. It also promises a packed WTA International in Prague later this year, full of homegrown talent.

You could certainly do a lot worse than being Czech WTA fan these days.

4 Comments on WTA, Ready for Czech-In! – A Nation on the Rise