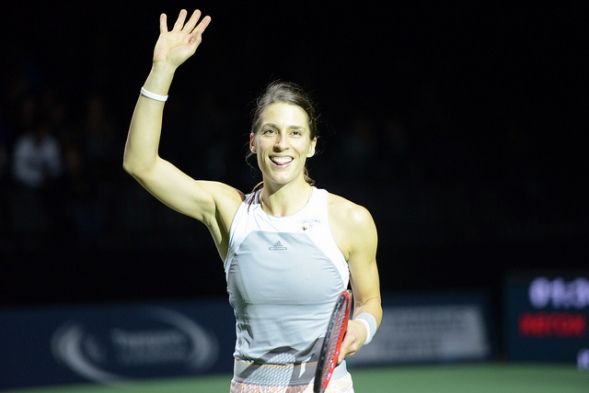 Andrea Petkovic and Carla Suarez Navarro came away with several rewards for reaching the final at the revived Diamond Games in Antwerp, Belgium last week. With the Spaniard was unable to take the court in Sunday’s final due to a neck injury, Petkovic came away with the champion’s trophy – a diamond encrusted racket – while both received valuable prize money and ranking points for their success in the Premier-level event. (All of this was just a bonus after they presumably enjoyed some delicious native fare of waffles and chocolate, of course.)

Waiting for them in Dubai, the site of the Premier 5 Dubai Duty Free Tennis Championships this week, was their final reward: a performance bye.

As defined by the WTA, a performance bye is “the type of bye awarded to a player based on her previous week’s performance as determined by the WTA when approving the calendar and draw sizes.” (pg. 243, WTA Rules) This was further expanded upon by the WTA last week.

In addition to the existing byes for the Top 8 seeds, two performance byes will be allocated for the Antwerp finalists who are also competing in Dubai. With the main draw in Dubai starting on Sunday (coupled with a Saturday final), this will allow the finalists’ first round matches to be held as late as Tuesday.

If either of the Antwerp finalists features among the Top 8 seeds in Dubai, their performance bye will not be required and a lucky loser from qualifying will go into the main draw.

When the draw was initially made on Saturday, ‘TBA’ was placed on the line next to Petkovic, Suarez Navarro, Barbora Zahlavova Strycova and Karolina Pliskova. After Suarez Navarro and Petkovic advanced to Sunday’s final in Belgium, the two were awarded byes in Dubai while the last two remaining players in the draw (Anastasia Pavlyuchenkova and a qualifier (eventually, Yulia Beygelzimer) were drawn against the Czechs.

The concept is simple enough, and while it’s been a term thrown around by many in tennis over the past week, a “performance bye” is not new – quite the contrary, in fact. The difference now, however, the WTA has given it a name (or at least, is beginning to refer to it publicly by that name.) Beginning in 2009, the four players who reached the semifinals in the Premier 5 events in Rome and Tokyo were given a bye in the next week’s Premier Mandatory event in Madrid and Beijing, respectively. That trend continued even when Tokyo was replaced in the calendar by the Wuhan Open, but was discontinued when Madrid and Rome swapped places in the calendar. In 2012, performance byes were also given in Cincinnati to the finalists from Montreal.

The success of players awarded performance byes has been mixed in recent years. At last year’s China Open, three of the four Wuhan semifinalists (Elina Svitolina, Caroline Wozniacki and Eugenie Bouchard) lost in the second round. Petra Kvitova, the fourth player who received a performance bye, reached the final. The year prior, however, three of the four Tokyo semifinalists (Wozniacki, Kvitova and Angelique Kerber) reached the quarterfinals or better.

In 2009, Dinara Safina completed the now-infamous “Rome and Madrid” double on the back of a performance bye. In back-to-back years, Wozniacki (2010) and Agnieszka Radwanska (2011) both won the title in Tokyo before taking advantage of their performance byes and later winning the title Beijing. Li Na, who lost in the final of the Rogers Cup in Montreal to Kvitova in 2012, defeated Kerber less than a week later to take the title in Cincinnati.

As far as this year’s tournament in Dubai is concerned, Daniela Hantuchova might feel a little hard done by. The 31-year-old Slovak veteran defeated Ajla Tomljanovic for her third career trophy at the Pattaya Open in Thailand on Sunday, before immediately flying to Dubai. A wildcard entrant into the draw, Hantuchova’s first round match against German Mona Barthel was scheduled for Monday, albeit as the first match of the night session. On one hour of sleep, Hantuchova, who was extended to three sets in three of her matches in Pattaya City, defeated Barthel 7-6(5), 3-6, 6-3 in two hours and 39 minutes to advance to the second round.

The difference for Hantuchova? The tournament in Pattaya is an International-level event, while Antwerp is a Premier. While the Slovak made it known that she would certainly much rather be in this situation than the alternative, she raised her concerns following the match.

Hantuchova’s reward for her cross-continental odyssey is a second round date with top seed Simona Halep on Tuesday, while Petkovic and Suarez Navarro will open against Zarina Diyas and Camila Giorgi, respectively. In a field as deep as Dubai’s, there are no easy early round matches, and it’s certainly not a stretch to say that Hantuchova would’ve also liked more time to prepare.

In the sake of fairness, she’s completely right. As stated in the WTA’s definition, the decision to award performance byes comes down to draw sizes; by extension, the size of the draw connects to the level of “prestige” held by the event. Is the rule suggesting that Hantuchova’s performance doesn’t carry the same weight or deserve the same consideration because it came at a smaller tournament? By not extending the same courtesy to players competing at International-level events, the rules governing performance byes certainly look to be unequal.

2 Comments on Saying Hello to Performance (BYE)s: A Tutorial