Welcome to Island U, TTI’s new weekly round-up that promises to track the progress of the week’s best (and worst) performers. Players who earn at least three Island U grades will make their way to the Dean’s List, where grades will be averaged into an easy-to-follow GPA system. Stay tuned as the 2015 semester unfolds!

Though there were times when it looked to be in doubt, Kei Nishikori battled through three consecutive three-setters – against three Americans – to reach the Memphis final, where he beat South Africa’s Kevin Anderson in straight sets to win his third Memphis title in a row.

The 25-year-old American reached the semifinals of an ATP event for the first time since last summer in Memphis, beating Adrian Mannarino and Bernard Tomic along the way. Young also reached the doubles final with partner Artem Sitak. The duo lost a tight three setter to Mariusz Fyrstenberg and Santiago Gonzalez.

The 2014 Sao Paulo champion lost in the first round to lucky loser, Facundo Bagnis. Once Delbonis’ points from 2014 come off, his ranking is going to take a plunge. He’ll hope to salvage what he lost last week as he takes to the court in Rio this week.

Italy’s Luca Vanni reached his first-ever ATP final last week. He also won his first ever ATP match last week. It was a week to remember for the 29-year-old Italian. Even though he was unable to serve out the final against Pablo Cuevas in the third set, Vanni nonetheless took the tennis world by storm.

Vanni was awarded a SE in Marseille where he will face fellow Italian Simone Bolelli in the first round.

Andy Murray looked awfully convincing in his first two matches last week in Rotterdam, but was unable to carry over those performances in the quarterfinals, losing to Frenchman/talent philosopher Gilles Simon, 6-4, 6-2.

Murray will be disappointed with this performance, especially given that he had not lost to Simon since 2007.

Pablo Cuevas and Stan Wawrinka: A

Cuevas and Wawrinka both won titles this week in Sao Paulo and Rotterdam, respectively. Both men had stellar seasons in 2014 and neither appear to be stopping anytime soon.

It was a big week for Fed Cup hero Andrea Petkovic, who not only won the title in Antwerp, but also re-entered the WTA’s Top 10 for the first time since 2012. If Petkovic can remain injury-free, this could be a big, big year for her. 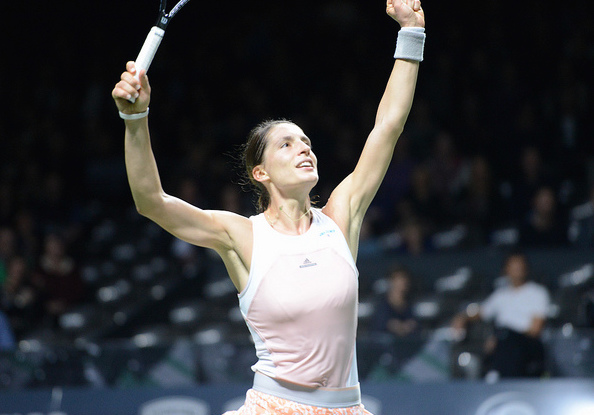 Daniela Hantuchova won her first WTA title since 2013 in Pattaya City. The Slovak displayed a tremendous amount of grit, rallying from a set down on three separate occasions including the semifinal and final. Earning bonus points this week, the former Top 5 player got only one hour of sleep after landing in Dubai, but still managed to fend off Mona Barthel over three grueling sets.

Bouchard lost her opening match last week in Antwerp. By unlike her fellow top seed, Bouchard at least had a say in the match, winning the first set before getting outclassed by Barthel in the final two frames.

After winning the first set 6-1 against eventual finalist Carla Suarez Navarro, Giorgi’s signature level of aggression became more reckless, allowing the Spaniard to capture the last two sets. Much like her mid-match collapse to Venus Williams in Melbourne, it was another match the Italian ought to have won, but gave it up because of her inability to manage her offense.

The German was able to manage just two games in her second round match last week in Antwerp to Francesca Schiavone.

Nothing else really to be said here.

How would you have marked the field last week? Sound off in the comments!

21-year-old NYU student. Passionate about playing tennis, coaching tennis, and writing about tennis. Feel free to contact me at any time!