The 25-year-old Ukrainian hasn’t had the most conventional path to success on the WTA Tour.

Born to a father who worked for international relations in a power plant and an economist mother, and the younger sister of a lawyer, the academically-inclined Tsurenko is a self-proclaimed pool shark, and lover of both architecture and the nation of Sweden. She first picked up a racket at the age of six, but didn’t take the sport seriously until her teenaged years, moving to Kiev at 17, where she turned pro in 2007.

Languishing around outside the world’s Top 100 for much of her career, her early highlights included leading a Bondarenko sister-less Ukrainian Fed Cup team to the World Group for just the second time on the back of an 0-6, 7-6(3), 6-3 win against Australia alongside Olga Savchuk in 2011; a marathon loss to Daniela Hantuchova at the 2012 Australian Open (a place that’s become quite important in the Tsurenko mythology); and two wins against Francesca Schiavone and Sara Errani (on clay, in Italy) in Fed Cup that same year.

Okay, a lot of luck.

Thanks to an injured Maria Sharapova, Tsurenko entered the draw of the 2013 Brisbane International as a lucky loser, and became the latest in a long line of players to have their best career result as an (LL). The beneficiary of Sharapova’s bye, she took out Jarmila Gajdosova and Hantuchova to reach the semifinals, before falling to Anastasia Pavlyuchenkova in a three-set match.

The result pushed her up to World No. 85, but she wasn’t done in Australia just yet. As a qualifier, she avenged the loss to Pavlyuchenkova in the opening round of the Australian Open, before falling to Caroline Wozniacki in an entertaining third round contest. Her efforts afforded her the chance to lead Team Ukraine once more – this time against Canada in the World Group II play-offs at home. 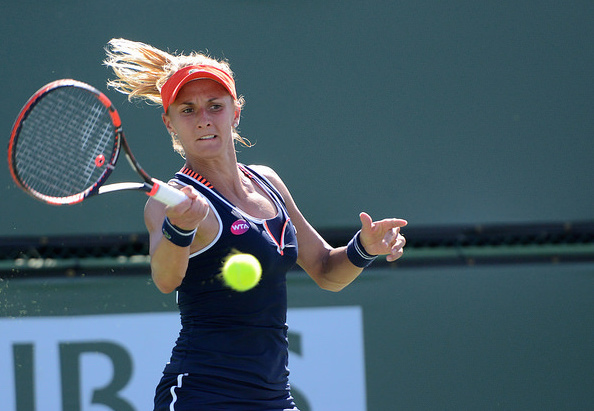 But as quickly as she had come up, she came crashing down. She struck 91 unforced errors – most of them off her, erm, less than reliable forehand – en route to a 7-6(5), 2-6, 6-3 loss to Sharon Fichman in front of her home fans, before falling to Eugenie Bouchard – who had rolled her ankle the previous day – in the reverse singles.

While an inspired performance by a then-18-year-old Elina Svitolina tied things up, Tsurenko was again the weak link in the deciding doubles rubber as she and Svitolina fell to Bouchard and Fichman in straight sets – knocking Ukraine down to zonal play for the first time since 2007.

The woman who had nothing to lose had now lost it all, and it affected her more than she let on.

“It all started with Fed Cup against Canada, where I lost three matches…” Tsurenko told BTU ahead of this year’s Fed Cup competition. “I had a serious crisis. I didn’t want to go on court. I even refused to play for the national team in Fed Cup [last year]. I couldn’t help myself, not to mention the team.”

Tsurenko went 3-9 to close out the 2013 season after reaching the quarterfinals of the grass court event in ‘s-Hertogenbosch as – what else? – a lucky loser. Her tailspin continued into 2014 as she lost her opening round matches in Shenzhen (the week her Brisbane points were removed) and at the Australian Open to fall to No. 132. She returned to the ITF Circuit but the losses continued to pile up, to names like Naomi Osaka (then-No. 386), Ling Zhang (then-No. 332), Ulrikke Eikeri (then-No. 306) and Bianca Botto (then-No. 538).

Ranked No. 170 heading into Wimbledon, it wasn’t a stretch to say that the Ukrainian was at a crossroads. Defending a second-round showing, a loss in qualifying could’ve sent her tumbling outside the world’s Top 200 – her lowest ranking since 2010. However, Tsurenko won three consecutive matches for just the third time in over a year to qualify for the main draw and defeated Dinah Pfizenmaier, 6-3, 6-0, to set up a second-round date with No. 3 seed Simona Halep.

Against all odds, the Ukrainian gave the eventual semifinalist all she could handle, and despite falling 6-3, 4-6, 6-4, she endeared herself to the No. 2 Court crowd with more than just her tennis.

Tsurenko’s run of form continued, reaching the quarterfinals in a $50,000 ITF event in the Czech Republic before defeating Melanie Oudin and Timea Babos en route to her biggest career final at the $100,000 ITF event in Vancouver ahead of the US Open. She fell to Gajdosova, 3-6, 6-2, 7-6(3), in a nearly three-hour match, before taking part in one of the more emotional championship ceremonies of the year.

The tournament took place at the height of the unrest back home, and having been articulate with the local media about the situation all week, the moment got the best of her.

Tsurenko in tears during the trophy ceremony when the announcer says she came from Kiev to get to Vancouver. Came with no coach/entourage.

“To be honest, it is very difficult for me and I feel like I should be at home,” she told the Vancouver Sun after defeating top-seeded Babos in the quarterfinals. “It’s a hard feeling when you understand that in your own country, which I really love, such bad things are going on…I have to do my job. I know I have to play tournaments.”

Having “enjoyed every minute” of her time in Vancouver, Tsurenko ended her season by qualifying for the US Open, making the semifinals as a qualifier in Tashkent, and closing out the year with a quarterfinal showing at the WTA 125 event in Limoges. In just four months’ time, she went from free-falling towards No. 200 to a second consecutive Top 100 finish.

With Timea Bacsinszky far away from her in the Indian Wells draw, Tsurenko’s campaign in the desert began with two wins against Mayo Hibi and Shahar Peer to qualify, before she beat Germany’s Annika Beck to set up a second-round meeting with Andrea Petkovic.

After taking a set from the German in the midst of her struggles in Charleston a year ago, Tsurenko went one better on Stadium 6 on Saturday. Despite letting a 6-3, *4-2 lead slip away, nearly letting a *4-1 third set advantage pass by, and losing serve to love as she tried to close the match, Tsurenko came away with her first career Top 10 win, 6-3, 4-6, 6-4.

“With me, confidence works like this,” she said last year. “Sometimes, I just cannot toss the ball because my hand is shaking and other times I just feel well and I am not afraid of anything.”

On Saturday in Indian Wells, it’s likely she felt a bit of both.

Best Quote: “I have a boyfriend and his name is tennis. It takes all my time.”