Can an attitude make or break a tennis career? You decide.

On Sunday, America’s Sloane Stephens worked her way past a pesky Svetlana Kuznetsova, 7-6(4), 1-6, 6-4. The Russian veteran – who has appeared at Indian Wells 12 times and seeded No. 22 – probably should have won the match given the circumstances. But as the scoreline indicates, the match was a roller coaster. Somehow, she pulled off the win.

She has the game to do just that.

“I just tried to stick with it,” Stephens said. “In the end I was happy to get the win.”

Her comment is fine. Players tend to talk like that, in stock phrases when presented with questions that deserve nothing more.

What sets Stephens apart, though, from her contemporaries — Madison Keys, Eugenie Bouchard, Belinda Bencic — is her delivery. She has no affect to her voice. She looks bored (and could be). It generally seems as if she wants to scoot out the door sooner rather than later.

“I was running down a lot of balls, making her play a lot of shots,” she explained, when asked how she came from critical deficits. “But you’re playing an opponent, so, you know, it’s kind of tough to always execute and things like that, especially when you’re playing a good player.”

Tongue-tied or not, everyone on tour plays an opponent. Why not say the name — Kuznetsova?

Stephens’ new coach, Nick Saviano – one she worked with earlier in her career – was another topic to explore in the press conference. She was not forthcoming. Was her confidence up, because it looked that way from outside the Stephens galaxy?

“You could say that, if you want,” she said.

When reporters failed to elicit something quotable from Stephens, they dug in.

Up next for the unseeded American is World No. 1 Serena Williams. Their history is marred by not-so-subtle back-and-forths and, of course, a certain public exposé.

“Like, seriously! People should know,” she told ESPN The Magazine, after beating Williams in the quarterfinals of the 2013 Australian Open. “They thinks she’s so friendly … no, that’s not reality!”

That win propelled Stephens into the stratosphere of tennis. But the rant about her presumed “mentor” reversed engines on any chits she’d accumulated on the publicity front, forcing Stephens to apologize.

“She’s the number one player in the world and she’s a competitor, and that’s it.”

They have not “mended fences,” either.

“A colleague,” she said, smiling. “There you go. She’s a colleague.”

She was later asked, “What would make you happy against Serena in two days?”

“If I play good match and I just out out there and compete and have fun.”

The sarcasm hung in the air, as people disbursed.

Playing the PR game has never been a strong suit for Stephens. Yet other women who have similarly skyrocketed to stardom have handled the pressure differently, and more far more magnanimously.

Canadian No. 1 Eugenie Bouchard stepped into the limelight last year; her record, a blockbuster. She reached three Grand Slams semifinals and a final at Wimbledon, which she lost to Petra Kvitova. Bouchard’s dream always has been to win, especially at the All-England Club. The weeks following that loss were tough. She went home to Montreal and made friends with a couch. This year, though, she’s back on board.

“I have definitely felt a change in the past year, a lot more outside attention and pressure and expectations,” she told the press, coming off her third-round win against Stephens’ compatriot and No. 30 seed, Coco Vandeweghe, 6-3, 6-2. “I’m proud of what I did last year,” the 21-year-old declared. “I think I progressed quickly, which was great. But this year is a new year; and, I’m not thinking about last year. I’m just trying to do my best at every single tournament, and we’ll see where that takes me.”

Bouchard feels comfortable “being hunted,” as one reporter characterized her presence on Tour this year. “I have definitely have sensed that switch a little bit; and, I feel ready for it. I see that as a kind of challenge. I’ve worked towards this position.”

Bouchard’s game, like Stephens’, holds no more secrets for their competition. They both are aggressive baseline players with the ability to outrun and outwork a point that challenges them. Stephens’ serve is more versatile than Bouchard’s, but in other categories, they match up quite evenly.

Bouchard remains excited about her career. “I’m just, you know, so happy to be able to play matches. I haven’t played a match in over a month. So I was really excited to play competitively. It reminded me how much I love this.”

Although former coach Saviano took Bouchard to the Top 10, she chose to make a change after her breakthrough season. She now employs Sam Sumyk, formerly of the Victoria Azarenka camp.

She likes his intensity; he’s, “very tough, which I like.”

Bouchard’s PR skills have noticeably improved over the last year. She had been a touch defensive at times, looking as if she needed to protect herself, her goals, her tennis, and her family. On Monday, though. she had obviously made strides to relax and be cordial, answering questions to the best of her ability, just like she plays tennis.

“I don’t think so,” Bouchard began, when asked if she has changed over the last year. “I think I have kept the same mindset I have always had. Just about trying to do my best, trying to be the best person and player I can every single day, trying to improve a little bit e dry single day. Just coming to a tournament or practice and seeing it as my job and work, but also work that’s fun.”

None of the women on court at the BNP Paribas Open look to be having much fun, during a match, especially one that hands them too many problems to surmount. Forgetting what happened on a down day is part of career growth.

Madison Keys has been there. Though she ultimately lost in three grueling sets to Jelena Jankovic Monday evening, the American retains an upbeat quality that her “colleagues” might do well to copy.

“I’m definitely happy about it,” the American said after her first win over Klara Koukolova. “I’m not going to cry about the fact that I made the semis, but it’s also moving on from it and not getting stuck in the moment. Tennis is very much what’s happening today. It’s great to do well there, [and] I’m looking forward and just trying to do well in this tournament now.”

Keys had an emotional reaction to Serena Williams’ return to Indian Wells. “I was definitely tearing up. It was an amazing moment. It was really special. You could see how much it meant to her and her family.”

She also could keep the mood light, answering questions about Sam Querrey’s time on Millionaire Matchmaker and if she would go on the reality TV show. “No, I would not.” But what about Sam’s experience on the show, “He thinks it’s like the gateway into the Bachelor or something, which is his lifelong dream,” she added, laughing.

And what group does she think she’d belong in, on the current season of Survivor?

“That’s the most far-out question I’ve ever been asked,” she said, again smiling “Blue collar, I guess. Since I think all tennis players are out there working every day.” 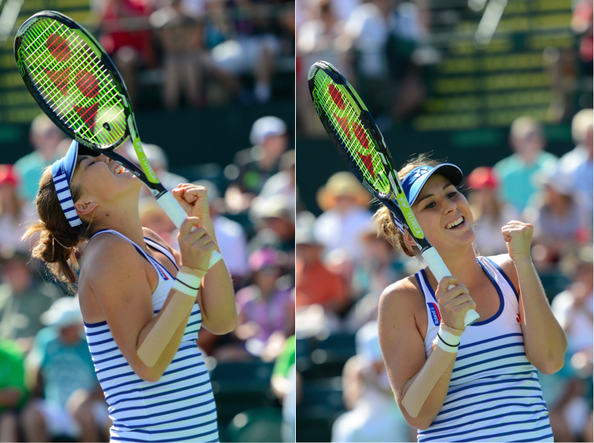 As Keys faded into the background, Belinda Bencic, who turned 18 last Tuesday, made big headlines Monday. The Swiss upset Caroline Wozniacki, No. 4 seed, in straight sets.

Bencic is making just her second appearance at Indian Wells. She lost last year in the first round to Heather Watson who, yesterday, upset Agnieszka Radwanska.

Despite an up and down start to 2015, Bencic’s win makes her the youngest player to advance to the round of sixteen at Indian Wells. The win also ups her total against Top 10 players to three.

It was her first win over a top five player, however – something she hadn’t realized.

Bencic watched Wozniacki on TV, when she was young(er). “Yeah, it makes me proud. Rally a big moment for me.”

Bencic said she doesn’t feel any pressure; she just plays. Her season did not start well, however, as reaching the quarterfinals of the US Open left her with expectations on her shoulders.

“It’s normal that sometimes you don’t have [good results] every time up,” she began. “I played a close match in Antwerp and then in Dubai and Doha. If you work hard you don’t have any pressure because you know what you can [do], and you try to do that in the match. If you have confidence, it’s good.”

Her Grand Slam resume might not be as stellar as fellow countrywoman Martina Hingis’s was at 18, but the game has changed.

“I have practiced with her since I’m 10,” Bencic said of Molitor. “She was my only coach. I’m very happy with the way she helps me, and so thankful for the situation I have. I couldn’t wish for a better coach.”

Bencic is so new to the tour that her management of highs and lows seems naive, which it should. But now that she is 18, playing guidelines have changed. She’ll be able to enter as many tournaments as her schedule permits.

“I just try to look positive and to look forward,” she said. “It was not such a big deal with me or my team to lose three matches. It was just the people did a big hype.”

Quite a turn around.

On Monday, she was patient and had a plan. Not easy tasks for a teenager.

Next up for Bencic is Keys’ conqueror, Jelena Jankovic, who she beat in Flushing, a good memory for Bencic.

She had played Keys once, at the Orange Bowl. Bencic was 9 and Keys was 11. They had both lost in the main draw in the Under 12 Division. They’d moved on to the consolation round.

The attitudes of these young tennis stars vary, but are definitely reflected in their records and rankings.

Stephens was ranked No. 12 at the end of 2013 and No. 37 at the end of 2014. The slide hardly seems to phase her. At the Family Circle Cup last spring, she said she didn’t care if her ranking slipped to No. 800 – a stunning statement from such a talented woman.

“Everybody is close,” Bencic, the youngest of these stars, said. “Everybody could have a deep run or a great series of matches. It’s all really close. All the players can beat each other.”

4 Comments on The Question of Attitude: On the Grounds at Indian Wells (Day 8)