Pound for pound and spin for spin: if you were to select two of the most intense players on the ATP World Tour, they would have to be Milos Raonic and Rafael Nadal.

The latter’s intensity shows in his results, his habitual performance of jittery gestures before each and point. Everything has to be just so. Turn back the clock a day and we could have easily written that the No. 3 player in the world was 8-0 in quarterfinals at Indian Wells.

No more. The pattern has been broken. 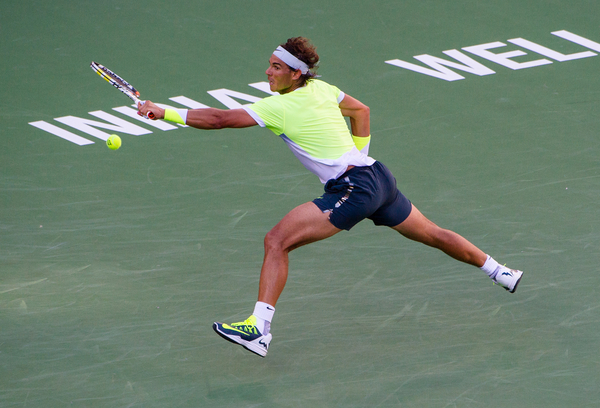 For the first time in their rivalry, Raonic ramped up his play and eliminated Nadal in three of the most entertaining sets of the tournament, 4-6, 7-6(10), 7-5. Nadal had previously owned a surprisingly lop-sided 5-0 head-to-head.

“I feel, obviously, all sorts of good,” Raonic said. “There was a lot of up and down through that match. All I could ask of myself was just keep competing and hope to find a way.”

If Raonic was elated on Friday, Serbia’s Jelena Jankovic was jubilant. The former No. 1’s zeal for tennis borders on the theatrical; at times, her personality can repel spectators as quickly as it attracts. Some would prefer she just get to the business at hand and win; she did so in emphatic style last night, winning 10 of the last 11 games against Sabine Lisicki, 3-6, 6-3, 6-1.

“I’m very happy that I was able to stay strong mentally and physically,” Jankovic said, explaining how she came from breaks down in the second. “I felt that I got the momentum going, and I kind of felt like I had the wind in my back.”

Despite losing the match from a set and break advantage, Lisicki’s mood afterward should have still been nothing less than ecstatic. The upside of her run to the semifinals at Indian Wells? The German had not only won some of her first matches of the season, but her first ever at the BNP Paribas Open.

“In the past I had problems adjusting to the conditions here,” Lisicki explained after up-ending defending champion Flavia Pennetta in the quarterfinals. “I think now I also believe more in my game. Not that I can only play well at Wimbledon, but do the things at different tournaments, too.”

The fact that Raonic advanced to the semifinals – where he’ll meet the No. 2 seed Roger Federer Saturday afternoon – speaks to the Canadian’s all-but-successful infiltration of the ATP’s Big Four. This week had marked the 23rd time that Nadal, Federer, Novak Djokovic, and Andy Murray advanced to the quarterfinals at the same Masters 1000 event, and the third time it’s happened at Indian Wells (2009, 2013, 2015).

But the dream quartet did not take center stage in the semifinals due to Raonic’s win. Had they all advanced, it would’ve marked the first time since the 2012 Australian Open.

“I guess, because you just want to prove people wrong in that sense,” Raonic said, when asked about upsetting the dream semifinals. “I have some good feel to that.”

Raonic’s drive to improve is well documented. During the off-season, he visited a sports psychologist, lost 12 pounds, and began a program to balance the energy between his mind and body – a process known as Meridian Exercises. During changeovers he closes his eyes, crosses his arms and taps his knees in order to relieve stress.

“I think I have a better understanding dealing with experiences of playing Roger, Rafa and Novak many times over the last 12 months,” Raonic declared. “I have been always sort of pushing to the later stages of the bigger tournament, and normally it’s them that I’m playing at those moments. Just, okay, what do I want to do different this time than the last few times. It worked out today.”

The stress levels of six-foot-five Canadian were immediately tested in his quarterfinal. He hadn’t been broken the entire tournament, but sloppy shots gave the Spaniard an early edge. Momentum swung from racquet to racquet in the second set, until the two reached an ostensibly decisive tiebreak. Raonic saved three match points and flipped the script to chart out a more formal decider.

“At the moments when I was playing those match points it didn’t really feel like match points,” Raonic said. “It was just like another point that I was trying to get through.”

After clinching the sudden death, Raonic walked to the sideline with some added pep to his step, curl from his otherwise slicked-back Bob’s Big Boy hair style tickled his forehand.

In the third, Raonic did what champions do – a huge compliment to a probable Grand Slam winner who has often tripped when the end is in sight. With a service break in one hand and his signature delivery in the other, Raonic’s win was ever so close.

“I enjoyed this match,” Nadal insisted. “I enjoyed on court. I enjoyed suffering his serve. I felt strong, with the right energy. I lost that match thinking much more positive things than negative ones.”

Jankovic, too, had to muster the energy, courage, and accuracy to get herself out of the doldrums against Lisicki. The 2010 Indian Wells winner found herself twice down a break in the second set after losing the first.

“There was I think [a] crucial point in that second set where I really felt like I could come back,” Jankovic said. “And, I did, after I held my serve. I was not giving any free points. Overall my whole game was a little more complete.”

If Jankovic wins the title and defeats No. 3 seed Simona Halep in Sunday’s final, she will move within the Top 8 on the Road to Singapore rankings. Having made the semifinals, she is guaranteed a return to the Top 20.

The Serb’s career has been marked by extreme highs — she was ranked No. 1 for 18 weeks. More recently, she dropped out of the Top 20 for the first time since March, 2013. Her last title, her 13th, came in Bogota the same year. Five years ago, she defeated a young Caroline Wozniacki to win the BNP Paribas Open title in straight sets. Injuries and coaching changes have interrupted a steady rise and otherwise glittering career.

She is, however, always threatening.

“I wouldn’t pick myself, actually,” Jankovic said, about the likelihood of her being in the final. “I was like limping three days before the tournament. I was actually in doubt if I can even play, if I’m able to run and move. When I came to the court the first day, I [had not] hit a ball for ten days.”

Having just turned 30 at the end of February, Jankovic seems to view her career through wiser lenses. She’s found no rhyme or reason to these results, but doesn’t seem to mind.

“Sometimes you prepare, you work so hard and train all day, and then you play so bad,” Jankovic laughed. “There there are times like this where you’re unprepared. I was coming off from an injury, but I felt so great, like just so happy to be out there.”

She does, though, deeply understand the meaning and essence of family. After her win, she hugged her mother, Snezana, and high-fived her team.

“It’s unbelievable,” she said. “They know and understand what I went through and what it means to me to be at this stage and be in the finals, and overall make this kind of achievement at these tournaments. I love my family. I love my team. I don’t think I can ask for more. I love them. I don’t know what else to say.”

On Sunday, Jankovic’s racquet will (try) to do most of the talking. She will hold down the ‘old’ end of the court while Halep, the youngest of the semifinalists, will anchor the up-starts.

The Romanian leads in their head-to-head, 3-1 – though the Serb held multiple match points in two matches she went on to lose.

“I can say that before the semifinals I thought that she [Jelena] can win,” Halep said, when asked about playing Jankovic in Sunday’s final. “I’m not surprised. She was No. 1 in the world, and she has a lot of experience and she knows how to manage the situations. I expect a tough match. Everyone can win.”

What do you think of Jankovic’s and Raonic’s weeks at Indian Wells? Sound off in the comments!

2 Comments on From Offense to Defense: Jankovic + Raonic Go Deep in the Desert