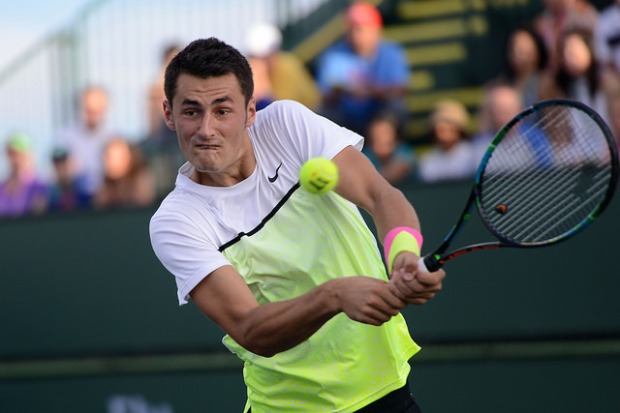 Love isn’t always easy. Neither is the spotlight.

As young Australian Bernard Tomic transitioned from a successful junior career onto the main tour, the world of tennis began talking about his potential place in the sport. With the “Big Four” of men’s tennis hardly immortal, the last several years on the ATP circuit has reminded tennis fans that no era lasts forever: our current champions will one day fade, and new stars will take their place.

Tomic was once a prime candidate, the first of a legion of rising stars with the flair and firepower to reaffirm the Australian tennis domination of days gone by. His results were solid, if not stunning. Davis Cup, as is often the case for young players trying to find their best game, had been a key space to build his confidence.

It was here where Tomic could boast a strong winning record of 14-2, including a win over Stanislas Wawrinka, and elevate public awareness of his potential. His best performance at the Grand Slam tournaments came at Wimbledon in 2011 where, at the age of 18, he progressed to the quarterfinals before losing to eventual champion Novak Djokovic in four sets. As of today, this remains his sole venture beyond the fourth round of a major.

At a young age, the results were starting to materialize. Tomic looked not yet fully formed, but well on his way to being a genuine feature player on the tour.

Since then, things haven’t gone quite as planned.

Controversy followed Tomic wherever he went, ranging from the serious – reports of a practice session snub with Lleyton Hewitt because “he’s not good enough,” – to the more salacious – photos of him receiving lap dances – or the sins of the father reflecting on the son – John Tomic was famously banned from the ATP Tour, Wimbledon and Roland Garros after assaulting hitting partner Thomas Drouet.

The off-court dramas – most recently a report that he boasted to a teenage girl about an apparent stash of cocaine – have had their effect on court.

As the results diminished, Tomic quickly went from next-big-thing to next-big-problem, at least in public perception. Now, at just 22, he is as likely to be greeted with eye rolls as he is with applause, a poster boy for disruption and arrogance.

Is it fair that we treat our young players this way, that we thrust them into the spotlight and then – as they inevitably fail to maintain a Big Four public persona – we berate, or even hate them?

To a degree, we have seen a similar phenomenon with Sloane Stephens. The controversies are certainly less dramatic, but dismissals of the young American as a diva or of a giver-of-little-effort have long damaged her perception and, perhaps, her performance. In the case of Stephens, the rate of her success either inflated the ego, or forced her to create a false confidence to protect from pressure – we can’t really know. Of late, Stephens has been performing better again.

It takes time, especially in 2015 where fame and fortune happen quickly, and violently.

Accountability is important. If your father assaults a hitting partner, he should receive a ban. If you seemingly tank a match, you should have to answer questions about it in press. If you endanger others with reckless driving, you should have your license revoked. These are simple action and consequence equations with which few would, or at least few should, disagree. You shouldn’t, however, be blamed for the actions of a parent. You shouldn’t be treated with disdain by people who do not know you or your personal struggles.

You should be allowed a second chance.

In tennis, there is a place to redeem yourself; that place is the court.

Bernard Tomic has game. He is a young, capable player who could make big strides if he applies himself with confidence and enthusiasm. There is also the chance that he will maximize his potential, and yet never reach the heights we once expected – in a young career, there is already baggage. All that can be asked of our young stars is that they work for what they get; from that work the next stars will emerge.

It is up to Tomic whether he wants to do that work.

At any time, he may do either.

Pressure may be a privilege, but in 2015 we know that on young shoulders it can also be a tragedy. Yet there must remain a flicker of love for tennis within Tomic. A flicker of hope that he can pick up his game. A flicker of determination that he will rise above the already tarnished reputation.

For that, we should hold onto a flicker of love for Bernard Tomic. He may surprise us yet.

What do you think of Bernard Tomic? Sound off in the comments!