Her affection stems, in part, from her title run at the 2010 Family Circle Cup, when she infamously throttled Vera Zvonareva in straight sets. At the time, the Aussie couldn’t articulate exactly how she dispatched the Russian in fifty-two minutes during the press conference.

But the week, and that win in particular, has left a lasting impression on the veteran.

“I love coming here no matter where I’ve come [in] from,” Stosur said, after her opening round win over Bulgarian Sesil Karantantcheva. “It’s certainly, you know, one of, if not my favorite week of the year to be out on tour. As soon as I fly in I instantly feel good about being here; and, I always try and be here for the whole week if possible.”

Stosur, seeded No. 9 this week, seemed most excited about the Charleston dining, which she has planned out for the entire week.

“I try to accomplish trying a few different places, but I always go back to my favorite ones,” she began. “I actually booked every night of the week, two restaurants every night. So, I’ve got quite the choice going on. The goal is to eat as much as possible, but keep playing lots of matches so you don’t put on 10 pounds in the week.”

A happy Stosur is a gift for this tournament. Yet she is one of many happy women who have arrived from a month-long stint at the March Masters. For them, Daniel Island is a welcome reprieve from the hubbub of those two big events.

Even Sloane Stephens was upbeat, a mood she rarely reveals. But she has her reasons; she had never won a main draw match at Family Circle Cup until Tuesday afternoon, defeating fellow-American Bethanie Mattek-Sands, 3-6, 6-3, 6-2.

“I mean obviously I love Charleston and I love playing here, but just unfortunate I’ve never won a match here,” Stephens told the press. “So, it was nice to get the monkey off my back and be able to get that win.”

Eighteen-year-old Belinda Bencic loves Charleston, too. She has her reasons, too; last year she qualified for the main draw and made a breakthrough run to the semifinals. This year she’s seeded No. 12, and through to the next round after a quick win pver Australia’s Casey Dellacqua, 6-1, 6-2.

“Yeah, it’s so great when I came here; it was a very special moment,” Bencic reminisced. “All the great memories came back to me. I feel really good on the clay courts and on [these] courts. I felt a positive energy from the first practice, and I think I showed it today in the match. I’m very happy.” 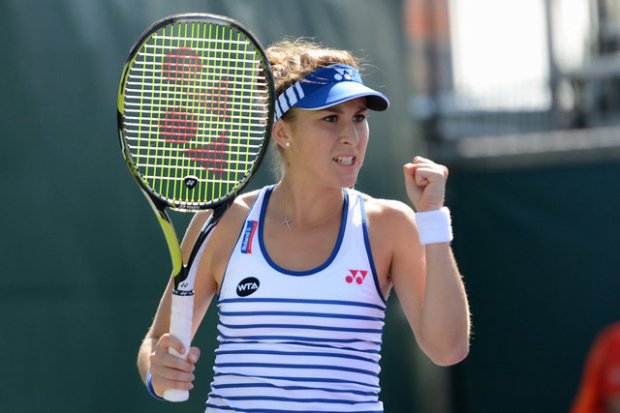 Since her Daniel Island debut, Bencic rose in the ranks to a high of No. 32 in October. She made the quarterfinals of the US Open and scored her first win over a Top 5 player — Caroline Wozniacki — in Indian Wells last month. Her shy, almost embarrassed, countenance seems to have been replaced by a youthful – yet wiser – young woman with a firm mindset.

“It’s a new year,” Bencic explained, when asked about any expectations or pressure she may feel about her return. “Everywhere you play good, the next [year] you have points to defend. So it’s okay in case something happens here. I really enjoy every round and I don’t look at the ranking points or just calculating stuff. I don’t like that. I just like to play tennis and then the ranking come automatically, if you do well.”

Bencic feels settled on Tour, too, as if she belongs – always directing her comments toward tennis, her singular focus. “And I played really good today. So, it gives me a great feeling for the next matches.”

As far as food, Bencic giggled, “I am excited about the food everywhere, actually. I heard it’s really good here, and the barbecue, it’s like a specialty. I heard on King Street there’s a lot of restaurants, so we might go there. And, yeah, just also here the players’ lounge the good is great.”

The Family Circle Cup is not all a flower bed of brilliant azaleas, dripping Spanish moss, and culinary delights, though. Hard courts are now a thing of the past – at least until summer – and that the clay court season has begun in earnest. Players must adapt to new court conditions – minute adjustments in their timing on the ball – and sliding, which can make their muscles ache at first.

Jelena Jankovic, 2007 Family Circle Cup champion, felt the sting of that situation against Tatjana Maria today. The Serb see-sawed back and forth with 28-year-old German, currently ranked No. 95, in the second set tiebreak until the former No. 1 double faulted away a match point. Maria didn’t need a green light to step on the gas.

Jankovic had quite a talk with her box at the changeover, falling exhausted into the cushy couches, one accoutrement for which the tournament is famous.

“I just had to regroup,” Jankovic said, after finally defeating Maria, 6-3, 6-7(6), 6-1. “It was not easy for me mentally when I lost the second set. But I kind of, you know, let all that frustration out and was able to play well in the third. I took control and started playing aggressively again.” 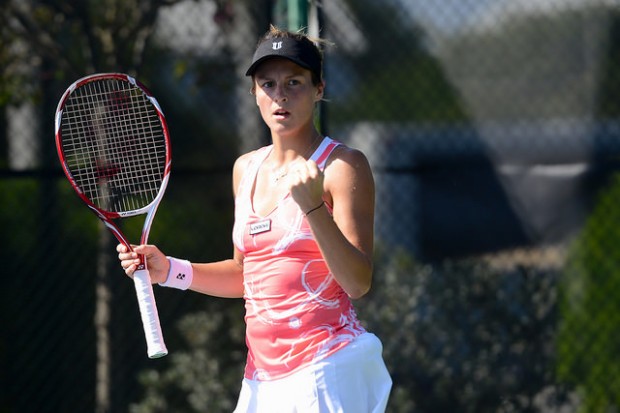 Maria is one of few women that travel on the WTA Tour with her child and husband, who is her coach. Dellacqua, Kateryna Bondarenko, and Evgeniya Rodina are also in attendance, with children in tow. Bondarenko and Rodina are coached by their husbands, as well.

Though Maria could not withstand the deluge of power and will from Jankovic, she won the hearts of fans when her daughter came on court to greet her.

Speaking of fans, two women who had come to this tournament since 2001 tried to grab Jankovic’s attention after her win.

“I saw two ladies last night in the restaurant and they were like, ‘oh, my god, we’re in box 109 … remember us?’” Jankovic said, laughing. “They remember when I was playing Venus [Williams] in 2007. So that’s already like eight years ago. It’s crazy.”

All kidding aside, Jankovic loves the atmosphere in Charleston.

“It’s nice to see familiar faces and have that support from the crowd,” she began. “It’s a very nice, very very nice atmosphere out there. It’s a beautiful court. I love the sofas. I love the stadium and, yeah, fans push me with it gets tough out there. I really like that and appreciate it.”