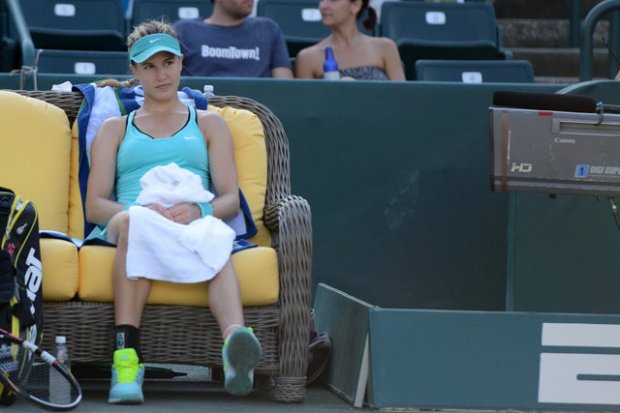 Family Circle Cup’s No. 2 seed Ekaterina Makarova pushed through her match early today although, when asked, mentioned how her stomach had bothered her. Less than three hours later, the WTA announced her withdrawal. She had a gastrointestinal illness and wanted to seek more medical attention in anticipation of the looming clay court season across the Atlantic.

If that wasn’t enough of a hit to the tournament, wildcard and top seed Eugenie Bouchard unexpectedly lost her opening match to America’s Lauren Davis, 6-3 6-1, later that afternoon.

Bouchard’s match was littered with errors from the get-go. Her forehand and backhand misfired, scattering balls every which way – but most prominently outside the white court lines. She took the ball early, but never adjusted for the bounce off the green clay.

Basically, she looked far more primed for a hard-court battle than a clay court war. 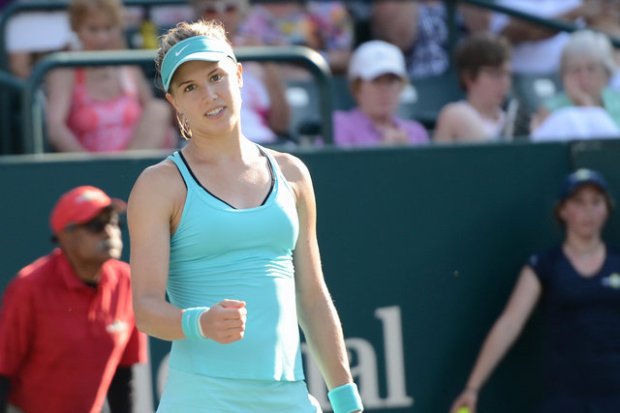 “I definitely felt a little slow today, overpowered, which is never usually the case,” Bouchard explained. “I think the first tournament on clay is always the toughest. But I kind of like clay. But, yeah, it definitely changes a little bit, but I think there was more to today than just tactics. They weren’t the first thing on my mind.”

With Sloane Stephens bowing out to German Mona Barthel today, 6-3, 7-6(3), the third round takes on a much more different complexion. Barthel, seeded No. 15, will face Davis instead of a much-anticipated crowd-pleasing blockbuster between Bouchard and Stephens, a pair of former Australian Open semifinalists.

Bouchard’s record at Family Circle Cup had been outstanding. In her inaugural appearance in 2013, the then No. 114 had to qualify for the main draw, eventually losing in the quarterfinals to Jelena Jankovic. Last year, ranked No. 20 and seeded No. 6, she reached the semifinals where she lost to eventual champion, Andrea Petkovic.

Her loss today edges her closer to what many might call a crisis. She is now 6-5 for the season, having wracked up three first round losses in five tournaments. 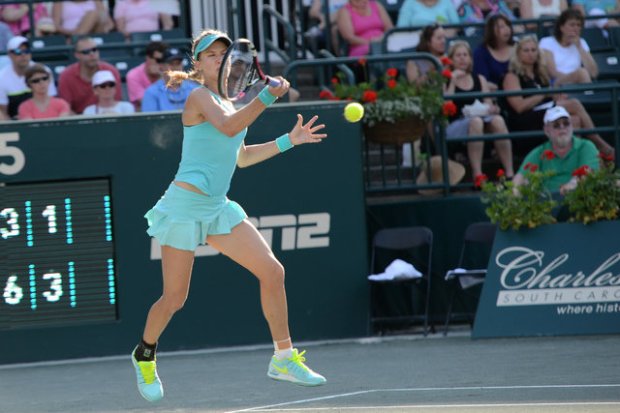 The turnaround in performance follows a breakout 2014, where she reached the semifinals or better of three of the four Grand Slam tournaments – including a star-making run to the finals of Wimbledon.

With that block-buster record and the wind at her back, Bouchard decided to part ways with Coach Nick Saviano before the Australian Open. She then hired Victoria Azarenka’s now-former coach, Sam Sumyk, who began work in earnest with the young Canadian after her quarterfinal finish in Melbourne. The French coach worked alongside Azarenka for five years, arguably the architect behind the Belorussian’s rise to No. 1 in the world.

“I know it won’t all come overnight,” Bouchard said. “You have to take the lows with the highs. I’m just going to keep working hard and wait until this low turns into a high. And really try to learn in the process and be patient. I think patience is really important to me since I’m not very patient.”

“Sometimes I think success masks issues or problems, so you know, you learn a lot more when you lose.”