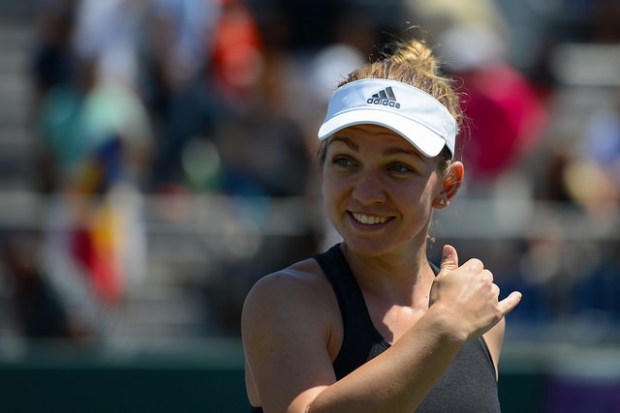 A year ago, No. 2 seed Simona Halep arrived to Stuttgart looking every bit the clay court contender.

Decked out in her new Adidas gear, the Romanian played flawless tennis early in her opening round encounter with Svetlana Kuznetsova. The 2008 French Open girl’s champion quickly whipped fans into a frenzy, with many declaring her tennis and clay court sensibilities worthy of the women’s crown.

No sooner were the words spoken did their inverse immediately take effect. Halep became tight, increasingly bothered by the heavy topspin coming from the Russian’s racquet. The Romanian was still fairly new to the upper echelons of the sport – having at the time risen 62 spots in the rankings since May of 2013 – and now readily admits to feeling the pressure.

“In the past I was very stressed to speak with you,” she exclaimed, laughing with the media during her pre-tournament press on Tuesday, adding, “and to everyone. So, now I feel more relaxed.”

The more things change, the more they stay the same. Halep may feel more secure, but the ground still shifts beneath her feet as the tour moves from hard courts to clay.

“Everything is different because it’s a clay court and we have like seven, eight months on hard court,” Halep admitted. “So, it’s difficult to start playing on clay, but I feel good. I feel good on clay. I have confidence that I can win matches on this surface.”

Like Petra Kvitova, the No. 2 seed hopes to ease into the clay court swing with a few matches, but will have to hit the ground running in her opening round against Garbiñe Muguruza. The Spaniard has beaten Halep in their last two encounters – most recently in Fed Cup a few months ago – but Halep has good memories of playing in a country that was the site of one of her first career milestones.

“I really want to play good tennis here because in Germany was my first title WTA, so I remember Nürnberg pretty well. But here it’s pretty tough, everyone is playing good tennis on a high level in the world. So, it will be difficult, but I have my chance and I will fight for it.”

Fighting has become a familiar refrain for the World No. 3 in press; where many pointed to her flat loss to Ekaterina Makarova in Australia as another sign she wasn’t ready for prime time, the Romanian has made the match a battle scar, a wound she won’t soon forget.

“That match against Makarova I said that I’ll never give up again. So, it just gave me more power to fight during the matches and just going on court and trying to play my best.”

And fight she has; avenging the loss to Makarova in Dubai, Halep won the title there before overcoming even greater adversity and opposition en route to her biggest career win in Indian Wells. At a time when some would expect her to quietly bow out of Miami with some niggling injury or other, Halep persisted through the second of the two mini-majors, and played even more emphatic tennis before pushing World No. 1 Serena Williams to her limits in the semifinals.

“I want to meet her again, but not very fast!” Halep joked when asked about the burgeoning rivalry.

With Fed Cup the prevailing topic for all of the top players, Halep too discussed the format and scheduling issues that kept her out of last weekend’s tie against Canada. Former great Ilie Nastase criticized his compatriot for sitting out the competition, but Halep refused to back down and remained practical about her decision.

“I decided on not going to Canada because it was [played on] hard courts and the jet lag, and it was very tough for me. I know that I have limits.”

Even without Halep, teammates Alexandra Dulgheru and Andreea Mitu each pulled out crucial singles wins (one each over World No. 7 Eugenie Bouchard) to earn a 3-1 decision and make a return to World Group that was two years in the making. Halep beamed when discussing her fellow “Fighter Girls:”

“They were fighting a lot and they believed, I think, in that chance that they can win the match – and now we are in the World Group. So, it’s amazing.”

The ROU/CAN tie got extra attention before it began as Bouchard refused to shake Dulgheru’s hand during the pre-tie photo opportunity. Speaking about it – and Dulgheru’s post-match response – to Romanian reporters on Saturday, Halep reaffirmed her remarks this afternoon.

“I was very surprised and I have no comments about this. It’s not my style, I can’t do that ever. So, it’s really tough to comment. But if she decided to do that it’s up to here. If that gives her a good feeling, it’s okay.”

What is Halep’s style when it comes to tennis? In her own words, something more thoughtful and methodical.

“I like to be a little creative on the court. I don’t have like a plan and I have to play like this all the match. I’m changing if I see that it’s not working.”

The Romanian enjoys thinking think her way through points and matches, and looks forward to the slower conditions that aid – and even accentuate – in that endeavor.

“I have to change some things but first I need a match to remember my style from the last years, my game. Maybe every player is changing, because a hard court is fast, and you just have to hit the balls and to be very fast on court. On clay, you have time to think about the points, and you have more time to think.”

Halep’s style proved far less stringent when it came to cars; when asked about the white Porsche reserved for the champion, she ended with a laugh, “I like all the colors!”

What do you make of Halep’s chances in Stuttgart? Sound off in the comments!