Andrea Petkovic has experienced some of her highest highs but also some of the lowest lows at the Porsche Arena. After withdrawing from this year’s tournament due to a left thigh issue, the German talked about her complicated relationship with Stuttgart.

When Andrea Petkovic told a full house on Monday night that she was not going to play the 2015 Porsche Tennis Grand Prix, the atmosphere of the opening night was suddenly and momentarily deflated.

Over the last few years, the German has had her fair share of difficult moments to overcome, with several of those occurring in Stuttgart.

Hell-bent on playing the biggest tournament in her country, Petkovic waited until late on Monday to see whether the hamstring jolt she picked up in a day earlier in Sochi would disappear.

“The strongest of all warriors are these two — Time and Patience”

“To me, it’s 100% something I’ve learned over the years and that I’ve learned with experience, especially in the year I got injured so many times, one after another.”

Stuttgart has been a double-edged sword for the German No. 1. She has celebrated and fought through some tough wins here, most recently in this year’s Fed Cup tie against Australia, successfully surviving extra innings during both her singles rubbers.

But there has also been the other side of the coin, particularly in 2012. Having just returned from a stress fracture in her lower back, Petkovic played then-No. 1 Victoria Azarenka in the second round and suddenly tore two ankle ligaments in front of a shocked home crowd.

When asked whether the injury from 2012 was still on her mind when deciding to play this week, Petkovic said:

“On the one hand I did get injured here once, and so it was still in the back of my mind not to risk it again. On the other hand, I didn’t want to be the one to pull out of here with injury because I was injured here before and it’s like there’s demons in Stuttgart. It was a tough decision for me.”

Why, is this all that’s meant by heroism? And did I do it for the sake of my country?

Due to her two knee surgeries, the German often struggles with her thigh when she arrives on the clay, exacerbated by playing a lot of matches. Fatigue kicks in and, as a result, the left leg tends to compensate for the right — and the tough Fed Cup turnaround certainly didn’t help matters.

Petkovic just talked to the press after her withdrawal. Obviously disappointed but felt it was the right thing to do. pic.twitter.com/Rhva8KOjAo

“For us, it’s the most difficult scheduling — especially with the tournaments in Stuttgart,” Petkovic said, and continued with a smirk: “I can’t really tell you what I would change, ’cause the schedule is full. After Wimbledon maybe, that’s the only spot where I see [an opening] and I would do it just because I’m very selfish and German and I would really like to play well here once in my life before I finish my career.”

People who are given to deliberating on their actions generally find themselves in a serious frame of mind when it comes to embarking on a journey or changing their mode of life. At such moments one reviews the past and forms plans for the future.

Touching back up upon the issue of being more careful with scheduling and injuries, the affable 27-year-old explained how the last few years have made her see the game — and maybe even things beyond that — in a different light.

“It has something to do with the person you grow and you become. Back then, I was scared of losing things. I was scared of not playing tournaments, losing points, losing money, losing that. I think that’s just the mindset you have as a young player that comes into the WTA Tour.

“You’re just afraid to lose it, and in the end you mess it up even more.”

After that injury in Stuttgart, Petkovic returned to competition in New Haven — full of doubts and worries of having fallen behind the competition. The rest of the season did not go according to the ambitious German’s liking and, to make matters worse, another injury befell her in late December during Hopman Cup when she ruptured her meniscus. 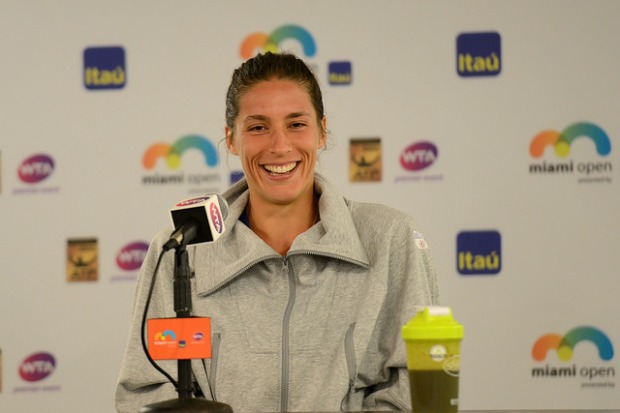 During her 2013 comeback, Petkovic lost her first round in Stuttgart and went through the hard slew of qualifying at events, suffering a second round loss at the French Open at the hands of Zhou Yi-Miao. Since that summer, however, the trajectory began pointing upwards again. Having won four titles since, the German is back at the top echelon of the game, and doesn’t want to repeat some of the mistakes of the past.

“I’m reading War and Piece; I was preparing [for Sochi]. Actually, it’s 1300 pages in German translation and I’m on page 1200, so I almost finished it. But I’m OK, you know, that also taught me something!”

The German might have reluctantly withdrawn from her home tournament but keeps looking ahead, maybe with the Tolstoy tome in the back of her mind.

“Sometimes in War, you have to retreat in order to win. And that is my strategy right now!”