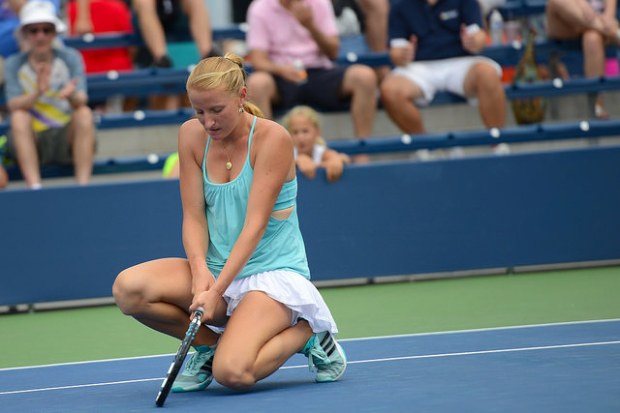 You’ve got to feel for Russia’s Alla Kudryavtseva. The former World No. 56 had the brightest possible start to her season, reaching the quarterfinals of Brisbane as a lucky loser.

Since then, there hasn’t been a ton of luck, and quite a few more losses for Maria Sharapova’s most vocal fashion critic. The Russian hasn’t won a match since January, and though she was seeded No. 18 in Roland Garros qualifying, it was always going to be a tough day against the equally feisty Paula Kania of Poland.

Without a live broadcast, the tennis world must rely on one of its own to relay the goings-on during the typical qualifying event. But few have been so faithful and diligent in their documentation as Stefano Berlincioni, who has been live-tweeting his Roland Garros observations on Twitter and is a must-follow @Carretero77.

The drama began towards the end of the first set…

Incurring a point penalty, Kudryavtseva needed to cool off:

Kania waiting for Kudryavtseva to comeback from toilet break pic.twitter.com/fTjRK9Nnkq

The Russian tried hitting through her frustration…

Kudryavtseva playing with absolutely no margin here. Just hit a sick dropshot that caused a net touch by Kania.

…but her emotions were starting to get the best of her:

Kudryavsteva crying on court after a missed overhead. Then attempted a tweener, failed and desperate again. Should have good pics

Not even a winner could lift her spirits:

Inevitably, there were tears…

I start with highlight of the day: Alla Kudryavtseva desperation. It's always sad watching a woman crying pic.twitter.com/DFjZuCp8i2

It all ended with a Kania win (and a quick handshake):

No look handshake between Kudryavtseva and Kania today at Roland Garros #RG15 pic.twitter.com/Kmaa7O5uyi

If the pictures aren’t enough, there’s even video: