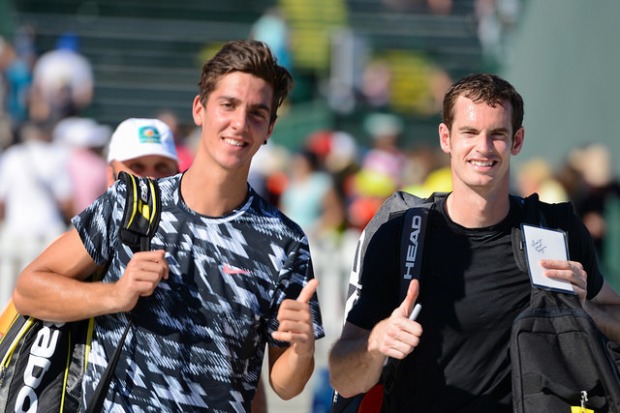 As the twin Tours gear up for the second major tournament of the 2015 season, you’d think this last week of warm-up events and practice would be all about intensely focused competition.

Not so on the ATP side of things, which has been boiling down to a familiar theme: friendship.

Because tennis isn’t all about winning, right?

It’s about honor and respect for yourself and your fellow competitors. Any given season may be a draining war of attrition, but it isn’t so bad when you’ve got a band of brothers flanking you on each side.

So you can imagine, then, how traumatizing it is when that notion is shaken — even in the heat of battle.

Playing João Sousa in Geneva earlier this week, Austria’s Jurgen Melzer was convinced his ball had bounced twice on Sousa side of the net. But this wasn’t just any opponent, it was his friend.

“If you don’t give me this call, our friendship is done!” Melzer warned.

Sousa seemed genuinely taken aback by the threat, equally convinced that he had done nothing wrong. A replay would prove otherwise, and the Portguese No. 1 publicly apologized for his mistake after up-ending Melzer in straight sets.

At least during the match, Melzer was baffled by the betrayal.

“It’s the worst thing that ever happened to me from a friend,” he declared.

“We spend so much time together!” he pleaded.

The two have struck up an unlikely friendship, with the young Austrian taking a highly coveted place as Gulbis’ protogé. It hasn’t necessarily benefited Gulbis on the court, however. He first played Thiem at last year’s US Open, losing from two sets up and felt the tension of playing a close friend.

“We were both really nervous throughout the match, I think.”

Taking a cue from his mentor, Thiem was even more frank in his post-match comments.

“I hated the situation. I would prefer [the win] against everybody else, but not him.”

Thiem has had to play his friend twice more in 2015, taking another straight-sets win over the Latvian in Nice, a result that will likely send the defending champion even further down the rankings ahead of his Roland Garros albatross.

It would seem most prudent, therefore, to keep friendship off the tennis court. Well, at least off the singles court. Known for its emphasis on big names playing doubles, Andy Murray made a last-minute decision to partner rising Australian Thanasi Kokkinakis. The pair upset No. 9 seeds Jean-Julien Rojer and Horia Tecau and became fast friends.

“We don’t know each other that well but he’s already calling me Muz, which no one else calls me,” Murray said. “It’s good work. It’s fine with me.”

The two met up again in Paris, taking a quick selfie in the gym:

The hyper-competitive Murray let some of his signature emotions loose in a tough practice session with the confident teenager — who just won a stacked Challenger title in Bordeaux last week — but something tells me the Brit won’t take it too personally.

So long as the feelings of friendship are left in the locker room, they are sure to still be there by match’s end.

What do you think of the camaraderie on the ATP World Tour? Sound off in the comments!