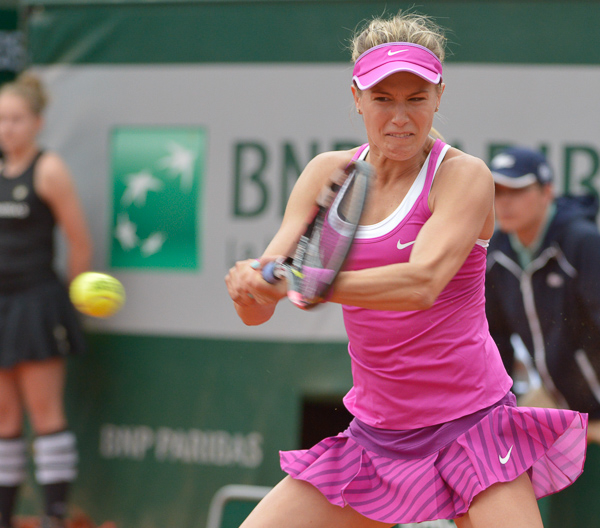 The glass is either half-full or half-empty, they say. The same could be said about the fashion roll-out this week in Paris. It’s either so bright you need sunglasses — that’s you, Nike. Or, it’s black as night, like the Adidas Y3 line — most likely inspired by the New York Yankees’ Evil Empire fashion division.

The contrast in colors is even more poignant because Paris is the heartbeat of haute couture. Coco Chanel. Yves St. Laurent. Plus tennis player and business man, René Lacoste. His nickname “Le Crocodile,” became part and parcel of his tasteful introduction of the men’s polo shirt in 1929. Lacoste’s designs remain a dominant element in lines from both dominant manufactures, Nike and Adidas.

But what’s up with the stark range in color schemes?

*Mind you, the color names come directly from Nike. Nothing has been made up here.

Nike noted in its quarterly retail catalog that its Hot Lava color, whether in a swoosh or as an accent color in other pieces from the group, is a “bold color pop.” However, this Hot Lava does more than pop.

And when it’s spread across a whole group of Nike players, the effect is somewhat nauseating. Witness Grigor Dimitrov’s Persian Violet and Ink striped polo today, seen in his first-round loss to American Jack Sock, 7-6(7), 6-2, 6-3. We won’t miss the shirt, but it is too bad Dimitrov, seeded No. 10, had such a short shelf live in Paris this spring.

Perhaps the color scheme is better suited for the younger Nike guys — Borna Coric, Nick Kyrgios, Bernard Tomic, and Thanasi Kokkinakis. They’re a flashy bunch. We could even forgive them for poor taste, but their choice is not their own. Nike makes suggestions.

Kokkinakis meets fellow Aussie, Tomic, in the second round on Thursday. They both are in the same kits, so line up eye protection.

“We were told by Nike to wear it,” Kokkinakis said, after his first-round win. “Actually, I sent [Tomic] a text after the match, because we either get the black gear or the orange gear. So, we get both, actually, but they prefer us to wear the orange or the pink or whatever. So, I said to him straightaway, I’m wearing the black tomorrow.”

Kokkinakis did just that, wearing the black striped version of the polo alongside matching doubles partner, Lucas Pouille. Together they beat fellow Aussie, Kyrgios and an elder doubles statesman, Mahesh Bhupathi, in a neat straight set win, 6-3, 6-1.

And poor Rafael Nadal. The nine-time champion comes into Paris maligned by the press for a lackluster spring, and then Nike dresses him up to look like a Smurf from head to toe. What was Nike thinking when it prepared its Nadal line for this French Open at least those many months? Go figure.

If that kit is what the stars have lined up for the Spaniard, he might want to lose before he reaches the quarterfinals and likely face top seed Novak Djokovic in his black and orange Halloween get up from Uniqlo. Can you imagine the reactions from a predominantly French crowd? Faux-pas extraordinaire.

Nike’s Hot Lava and Fuchsia Glow are better worn on its women’s team, but that, too, knocks your eye sockets for a loop.

However, three cheers for Nike’s suggestion to put Victoria Azarenka back in its Court Shorts. Not as a fashion statement, perhaps, but because she churned out good results in them. This fortnight they should get a good workout, as the No. 27 seed finds her way through a difficult part of the draw. She’s one round away from a possible clash with Serena Williams, also in a Hot Lava dress with jacquard print plus matching shoes.

A dandy duo for all to see.

Perhaps Nike’s choice of colors, which are usually at the cutting edge of any sport’s fashion trajectory, would have been better introduced in Miami or some other tropical tournament. The one bonus of the brightness? It stands in stark contrast to the Adidas black Y3 Collection.

Tennis has never warmed up to black.

White, mais oui. Navy…okay. But black, not so much. Perhaps, then, Adidas is directly challenging the sport, asking it to accept that which is of no color consequence whatsoever. Because the fact is, black is a total lack of color.

When Ana Ivanovic wears black, people notice. She looks as fabulous in the black, capped sleeve Y3 dress as she would in any color they might have thrown her way. And the knee socks? A nice touch.

Ivanovic, though, might step on the toes of other fashion-forward femme fatales especially if she can put a few rounds together, an iffy matter for the No. 7 seed after her first round scare. Otherwise, the allure will fall flat.

Perhaps France’s Kristina Mladenovic will carry the message for the Y3 introduction, if that were to happen. Wearing the same dress as Ivanovic, Mladenovic did what many predicted might happen today against Eugenie Bouchard, the No. 6 seed. Mladenovic defeated the Canadian, 6-4, 6-4. Even in her cheery Hot Lava striped Nike Victory Skirt, Bouchard couldn’t spunk it up enough as she pushed to win the second set. Down 5-0, she ran off four games to no avail. Not a pink day, or season, for the 2014 semifinalist.

Gilles Simon, another Adidas player, is not the man many imagine as a dominating Darth Vader figure. His physique doesn’t fit the picture. When he appeared across the net from teen wildcard and Frenchman Lucas Pouille, yesterday in his Y3 black-on-black kit, the dark color contrasted with Pouille’s circus-like Nike get-up. Did it intimidate the 21-year-old enough to scoot him off the court, 3-6, 6-1, 6-2, 6-4? Perhaps.

There’s no IBM stat for throwing an opponent a color curve. But if ever there was an opportunity, Roland Garros 2015 has to be it.