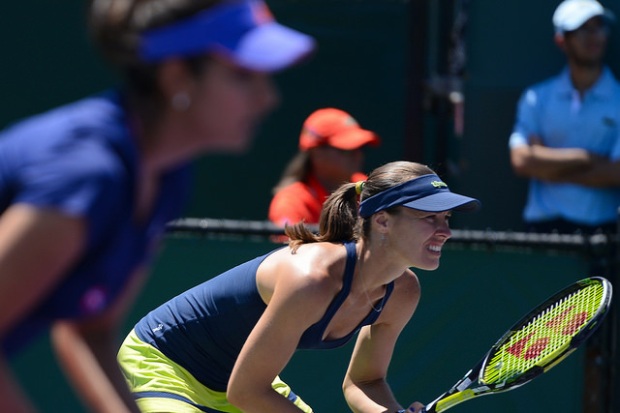 In her heyday, Martina Hingis was a strategic and tactical dream in singles. She played the game, moving the ball up and back, right and left, simply setting up opponents to fail. She won five Grand Slam singles’ championships as a result, nine major women’s double titles, and reached No. 1 in the world by the age of 17.

Her ankle was problematic. The on-court equation shifted, as the Williams’ sisters flooded the game with their powerful remix of tennis. But the Swiss Miss soon resurfaced. She returned, only to leave again after an aborted comeback ended under a cloud.

In spite of all that, Hingis remained a rare bird. She flew back to the nest, yet again, in 2013 — perhaps looking to retrieve the satisfaction she felt prior to ‘retirement,’ or a relationship that could provide her an emotional net post: solid and unfailing.

Singles wasn’t much of an option. Her game no longer fit the baseline-basher mold. But her doubles prowess continued to be a perfect match.

Today, she and Leander Paes took a step closer towards another Grand Slam mixed doubles title, defeating Artem Sitak and Anastasia Rodionova, 6-2 6-2, in little over an hour. Paes and Hingis won the Australian Open this year in their first major tournament as a pair. It was also Hingis’s first major title since returning to one of the four biggest stages in tennis. They had previously teamed up for World Team Tennis tour as part of the Washington Kastles, a team that has claimed five titles in the last six seasons.

“Leander is a very giving person and is always worried about me being fine,” Hingis told the Times of India. “It’s most important to have chemistry on court. I feel with him on court, nothing can go wrong. He is a great human being. As a woman, it’s important to feel safe on the court. Be it in a relationship or in life in general or on court, you need to feel protected.”

Hingis learned this life lesson at an early age, moving from Communist Czechoslovakia to Switzerland alongside her mother, Melanie Molitor. Hingis learned a new language, a life-defining sport, and to rely on her mother for support in all aspects of her life.

“She is my mother, my friend, my coach, all in one person,” she said in the same article.

Kate Winslet dramatically spoke of, ‘the loneliness of a singles competitor,’ in ESPN’s theatrical introduction prior to today’s matches from Wimbledon. She intimated that fun was not an ingredient on that stage. Problems would have to be solved in singular strokes of genius.

This type of play was not a choice for Hingis, given her personal history and the game’s trajectory.

Sabine Lisicki should be credited with drawing Hingis to the tour, too. They paired up as a doubles team in Indian Wells in 2014, as Hingis took on the role of coach/mentor for the big-serving German.

Later on in Miami, they went on to win the title over Ekaterina Makarova and Elena Vesnina, a dynamic Russian duo now seeded No. 2 at this year’s Wimbledon. In the semifinals, Lisicki and Hingis saved seven match points.

“Coming back from seven match points, the ball is in or out by a hair, and happiness and sadness are so close to each other and the adrenalin and being in another final,” Hingis told the press in Miami. “Nothing compares to this when you’re out there.”

Before Wimbledon, though, Lisicki called off their coaching relationship but left the door open for more doubles. So at this year’s Brisbane International tournament, they combined forces and won.

“It was a mix between my aggressive game and her making some amazing shots at the net,” Lisicki said, the WTA reported. “We complement each other very well, and the most important thing is it’s so much fun.”

Like most tennis celebrities, Hingis has been followed off court and into her private life. At Family Circle Cup this spring, Hingis was questioned about a large what-looked-like diamond ring on her left wedding finger.

“Oh, you’re into gossip, huh,” she replied, with a rather disparaging tone to her voice.

Asked if she had anything to inform the press about, she quickly said, ‘no.’

Now with Mirza, Hingis is the top seed at Wimbledon. They have successfully played their way to the quarterfinals where Casey Dellacqua and Yaroslava Shvedova, seeded No. 9, await.

This match will be another serious challenge; Dellacqua and Shvedova won the Mutua Madrid Open this spring — in their first pairing — taking out the heavily favored team of Bethanie Mattek-Sands and Lucie Safarova, who are undefeated in Grand Slam play and remain in the draw at Wimbledon.

Hingis and Mirza seem to have found common ground on their doubles’ court of choice. They are 26-5 for the year, having won Indian Wells, Miami, and Charleston — where they reached the No. 1 ranking on the WTA’s Road To Singapore.

“Mentally it’s been tough for us the last five weeks,” Mirza told the press in Charleston, after winning the title. “We haven’t switched off. We’ve always been on. That’s why this week was tough. Because mentally to keep staying in it, you know, to do it twice and then do it again, and be like, okay, we’re back in the first round again.

“You have to fight through those emotions.”

They went on to play Fed Cup, Stuttgart, Madrid, Rome, and the French Open, where they lost in the quarterfinals to eventual champions Mattek-Sands and Safarova.

To have managed months of ups and downs clearly speaks to their commitment to one another and to the game itself. It might not be as dramatic as singles — where players are asked to take every ball and fend for themselves — but it includes one of the more difficult life experiences: maintaining a relationship.

The Swiss Miss believes the key to a successful partnership is feeling safe. Between Mirza and Paes, two is better than one for Hingis when seeking tennis history.