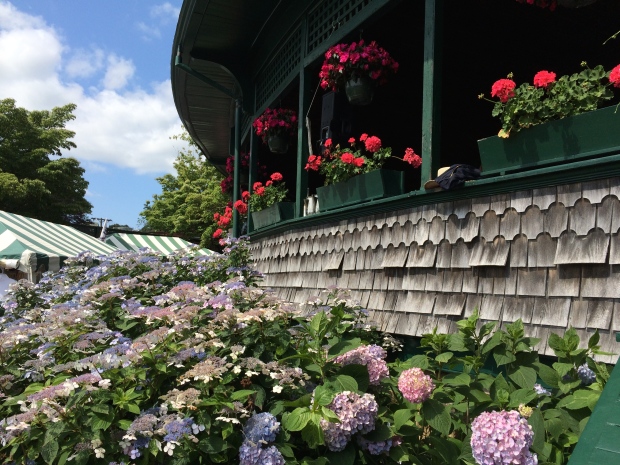 Two worlds intersected today in Newport. Coming from one direction was the modern game represented by four ATP semifinalists, while arriving from locations around the world were three Hall of Fame inductees.

Nancy Jeffett, one of the 2015 inductees, who at 87 is spry and dedicated made her intentions clear; she wasn’t about to take her foot off the tennis gas pedal.

“I’ve had an extraordinary life with tennis,” she said at the induction ceremony. “And I plan to have more influence. I love you.”

At 36, Ivo Karlovic may seem light years away from Mrs. Jeffet, but as the second-seeded player at this week’s Hall of Fame tournament, his serve-and-volley game and gigantic serve statistics contribute to a wide audience of followers. His opponent today, No. 4 seed Jack Sock — a Nebraska native who knows how to give a tennis ball a ride — carried the hopes of American tennis that it, too, could rise to the level of dominance it witnessed decades ago.

John-Patrick Smith, a four-time All-American out of Tennessee, was the surprise semifinalist. Unseeded and ranked No. 156, Smith stood at the brink of his own history. If he advanced, he would become the second player this year to reach his first ATP final, having previously never won a match on tour. Smith faced Rajeev Ram, also unseeded, but a Newport winner in 2009.

To meet all the players and dedicated leaders of the game today, on what was called ‘the jewel of the calendar year,’ essentially spoke to the essence of the sport: relationships.

Billie Jean King, who was inducted in 1987 but on hand to receive her commemorative ring, spoke about World Team Tennis, which she started and is celebrating its 40th year of success. “Men and women playing on the same team and working for the same goals. That’s my philosophy,” King said.

King’s influence on tennis, and especially women’s tennis and gender equality, was encapsulated eloquently by Hall of Famer Owen Davidson.

“No one in the world — man or woman — deserves a Hall of Fame ring more than Billie Jean King.”

Rosie Casals spoke on behalf of King, too. They first met at 13 and won Wimbledon doubles in 1973 (plus four other times) the same year King won singles and mixed doubles alongside Davidson. Both women affectionately called Davidson, ‘Dave-O.’

“Somewhere around that time,” Casals said, reminiscing about her childhood friendship with King, “I tagged you with the nickname of ‘Old Lady.’ [And] now we are.”

King reminded the audience that women’s tennis is the number one women’s sport in the world, which is largely due to her and eight other prescient activists who, in 1970, started what would become the WTA. Today it includes more than 2,500 players from 92 nations, all vying for an unprecedented $130 million in prize money.

A year before King and her gang launched the WTA, Jeffett laid groundwork through financial commitments for the proliferation of women’s pro tennis. The Dallas resident was met with arguments to the contrary, that women’s pro tennis was not a viable idea. She persevered, nonetheless. In 1972, the Maureen Connelly Brinker Memorial became the first women’s professional event “that was televised and game prize money to its winners,” wrote the Hall of Fame magazine. It was later called The Virginia Slims of Dallas, and expanded nationwide.

“Nancy is a lifetime contributor, earning today’s induction because of her early risk-taking as a WTA promoter, even before there was a WTA,” Pam Shriver said. “Nancy’s legacy continues through her foundation — Maureen Connolly Brinker Tennis Foundation — that helps develop and support junior tennis players worldwide.”

Nothing today came close to the visceral experience of a relationship than the one between Rich Berman, who introduced his friend David Hall. He won 32 Super Series singles titles, which are the equivalent of majors. He also thrilled hometown fans in Sydney, winning the gold medal in singles and silver medal in doubles at the 2000 Paralympic Games.

At 16, Hall was hit by a car and the accident led to the amputation of both legs. Yet seven months later he was ready to move on, an impressive demonstration of will and a sign of how deeply he wanted to put the tragedy behind him.

“I wanted to move on,” Hall began. “I wanted to put that negative energy some place else. I could pour negative into positive through tennis. It turned into dreams.”

His path to those dreams began in Boulder, Colo., in 1994, when he wheeled himself into the tennis facility owned by Berman. He became his coach and best friend. Several times during his introduction, Berman broke down in tears.

“So here I am, the luckiest of coaches introducing my friend and hero to you and to the Hall of Fame,” Berman said. “Many champions have been here and many more will come, but none with a bigger heart, none who played the game harder, none more fair or more noble. I have to say that in addition to the three times I was told I was a father, this moment is my proudest.”

“Rich was my tennis coach,” Hall began. “But to me he was much more than that. He was generous, he was kind, and he sacrificed so much to help me chase my dreams. He embraced me and brought me into his home, made me feel welcome. You changed the course of my career and changed my life, and for that I’ll be forever grateful.”

Hall has a lighter side, of course.

Did You Know: David Hall, who will be inducted into the Hall this weekend, prepped for matches by listening to Slayer pic.twitter.com/5hjrX3TzBP

“I’ve been a heavy metal fan since I was a teenager,” Hall said. “I would use it not as a ‘pump-up’ motivation but as a calming effect. It had a unique effect. It kind of centered me and made me focus on what I needed to do. I think it really helped. I was using whatever I could to prepare for the matches.”

The history of the sport was partially written by these three inductees — Amelie Mauresmo (who was not here because she is expecting her first child within the month), Jeffett and Hall — yer, today’s semifinals also etched their storyline.

Although Smith saw the chance and tried boldly to grab it, he was unsuccessful against Ram, losing 6-4, 7-6(4).

“My serve wasn’t great, about 47 percent,” Ram began. “I was happy with my second serve. I served and came in a little bit, I stayed back and went for a few. But I did pretty well to defend my second serve, which was key to the match.”

Karlovic disappointed fans as he defeated Sock, 7-6(3), 6-4, entering his 14th ATP final. He’s looking to win his seventh title tomorrow against Ram, and second of the season.

“It was a real difficult match,” Karlovic began. “I don’t like his game. He has heavy topspin that goes on my backhand so it was difficult. But I was able to do it in the end. I’m happy about that.”

The International Hall of Fame, in addition to its $17 million in expansion plans, would like to have more recognition internationally. The sport calls for it to move in that direction. The ring presented King today is a step. In the future, after an inductee is enshrined in Newport, another ceremony will follow in either their home country or a location that epitomizes the Hall of Famer. Bjorn Borg and former Czech champion Jan Kodes (pictured) received their rings at Wimbledon weeks ago. In a few years, Hall will receive his ring in Australia, his home.

All of this aims to make and preserve the relationships that are tennis, and make it the greatest game on the planet.