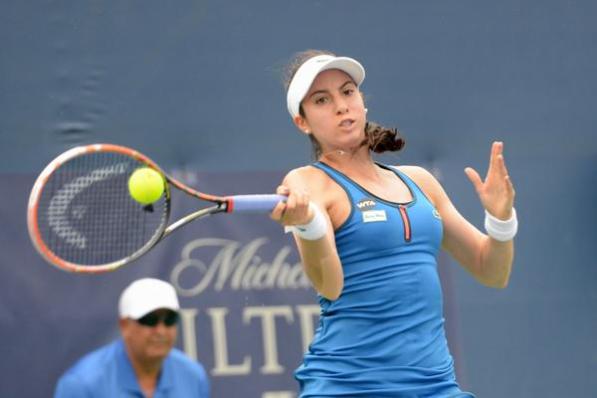 That’s not an easy statement to make about a 23-year-old, but for the New Jersey native, it fits. Her game has gone from great — when in August 2012 she reached a career-high ranking of No. 24, then tumbled toward No. 100 after suffering a debilitating bout with mononucleosis in the fall of the same year — to her current No. 62 spot on the WTA ladder.

Today at the Citi Open, she showed game maturity that resembled her early career, especially 2011, when she scored a huge upset over then reigning World No. 1 Caroline Wozniacki at Cincinnati in their first meeting. It was the same year she made her top 100 debut.

Today, McHale didn’t defeat a top-five player but locked down her concentration to come back from two breaks down in the third set against the always-feisty and persistent Yulia Putintseva, 6-2, 1-6, 7-5 to advance to the quarterfinals.

“It was a really hard fought victory there for a while,” McHale said. “I seemed quite out of the match. She played really well to come back in the second set. And, I [stepped] back in my positioning. But I hung in there.”

During the same set, Putintseva received a point penalty which led to a critical game going in McHale’s favor.

“I really wasn’t aware of what exchange happened,” McHale began. “I just knew we were waiting because she had called the supervisor.”

Although rain and the kerfuffle with Putintseva briefly interrupted their match, the moments washed over McHale. Unlike her opponent, she kept her emotions in check.

“It was just a brief delay, and it didn’t affect the following game.”

This calm trait has always benefited McHale since she arrived on the WTA Tour.

“I’ve always been this way,” she said, during her post-match press conference at Family Circle Cup in 2011. “I’ve actually gotten more expressive as the years have gone on.”

That expressive nature now, four years later, has translated in to a solid ground stroke discipline and a reliance on her coaches when point construction seems to waver.

“I started to put more shape on my shots and extend the rallies,” she said Thursday, when asked about the coaching assistance she got in the third set. “I think that’s how I came back.”

Her quiet nature has sometimes left McHale sitting in the back of the media bus, but, her opinion has not wavered about the lack of publicity. She sees the positive side.

“I think all the Americans are pretty close and friendly,” she said. “We practice with each other often. It’s a good group we have.”

That even-tempered characteristic will bode well for McHale as the week progresses. Tomorrow she plays Anastasia Pavlychenkova for a spot in the semifinals on Saturday. The Russian, who is ranked No. 40, upset the No. 3 seed Belinda Bencic, 6-2, 6-4 today. McHale lost to the Russian at Eastbourne in 2012 in their only meeting.

“She’s playing really well,” McHale said. “It’ll be a tough match. She’s an aggressive, all-court player. I’m going to have to have good positioning, and not go too far back like I did today.”

Just because McHale doesn’t scream personality, doesn’t mean she’s uninterested in the climb to improve her game and rankings. She wants to get back within striking distance of that top echelon and is enthusiastic about all of it.

“I’m working very hard to try to get back to that level,” she began. “I just have to be patient, and take it one match at a time. It’s not easy to sustain [a high level]. Once you get there you have the points to defend.”

Taking one match at a time is a common statement players lay on the press. The rankings questions, ‘Do you have goals?,’ ‘How far do you want to go this year?,’ also bring repetitive responses. But McHale, who’s worked so hard to return her place at the American table, gave a little peek into her plans for the rest of 2015.

“I’ve never been one to give myself a ranking goal,” McHale said. “I just think there are so many factors that go into year-end rankings. So my coach and I set goals about how I want to play and things in my game we need to work on. If I continue to work on those things, the ranking will take care of itself in the long run.”

McHale’s eyes brightened when she spoke about giving back. Her enthusiasm was genuine as she shared about her work with kids near her home in Teaneck, New Jersey. In February, McHale visited the Harlem Junior Tennis and Education Program where close to 70 children showed up to meet her.

“I love doing things like that,” she said, with a smile. “It’s important to give back. Tennis has given me so much. So, it’s nice when you can inspire young kids to play tennis. It’s lots of fun for me, too.”