TTI is hitting the road again – René Denfeld is going to chime in from the BGL BNP Paribas Luxembourg Open this week, one of annual the final stops on the WTA Tour. The tournament in the small landlocked country between Germany, Belgium and France is one of the last remaining strongholds of the once prominent fall indoor swing in Europe.

The BGL BNP Paribas Luxembourg Open is not an event of grandeur, pomp and circumstance.

The atmosphere is cozy, and players, umpires, ball kids, media and tournament staff frequent the same corridors. If you’re running back and forth constantly, you’ll probably have bumped into everyone at least once — if not twice — but that’s certainly part of its charm.

With qualifying wrapping up and main draw play getting underway on Monday, more and more players found their way to the media centre to pick up their accreditations. A couple of them sat down to answer the questions of the press around noon, namely defending champion Annika Beck of Germany, No. 3 seed Sara Errani and No. 2 seed Ana Ivanovic, who lifted the trophy in 2007. While their 2015 seasons are still technically in progress, many are already looking forward to time off and 2016.

“Now I really feel like I’m setting up a great team around me,” Ivanovic said. “I have a new fitness coach, my coach and a physio traveling with me. I feel like all the areas are covered and I’m really excited for the next season.”

The Serb enjoyed a year with mixed results, with one of the highlights being a semifinal finish at Roland Garros, but also a number of early losses — causing her ranking to slip back outside the Top 10. Still, with a new team set up around her, the 27-year-old is excited for the upcoming months and already looking ahead to next year.

“Obviously, the Olympics are my dream, especially being held in Rio,” she said. “It’s always been my dream to go there as well, so that’s a priority and obviously the Grand Slams as well. I really want to peak for them and hopefully, I can add another title to my name.”

Errani hasn’t looked quite as far ahead into 2016, opting to discuss her schedule in the off-season and plan it with her team. As for her year, she was fairly content with it, adding another title (in Rio De Janeiro) to her resumé and making deep runs at several tournaments such as Roland Garros and Toronto.

“Yeah, it was a nice year, not an easy year for me but I’m happy to be in the top 20 for the moment,” she said. “It’s a good result for me and happy to go the Zhuhai tournament.”

Firmly focused on the present and among the first winners of the day was Mirjana Lucic-Baroni. The Croat came out on top of a tight two-set match against WTA Rising Star Carina Witthöft, 6-3, 7-6(3), and showed no signs of slowing down on court yet — even though she admitted that she’s looking forward to the off-season.

“It was a really long and hard season, hard work, many ups and downs, but overall a good season,” Lucic-Baroni said. “I’m happy. I battled through some rough things and I deserve a nice vacation. I’m really looking forward to that — but I want to stay here as long as possible. I want to have a good week; I know vacation is just around the corner but I want to stay here and give it one last final push this year!”

With every match on Centre Court involving German players, fortunes were mixed over the course of the day for Luxembourg’s neighbors. Unseeded veteran Tatjana Maria emerged victorious over French wildcard Tessah Andrianjafitrimo — making her WTA Tour debut — but the 17-year-old from Montpellier held her own well against the experienced German. She led by a break in each set, falling 7-5, 7-5, but her willingness to play the entire court and move up to the net impressed.

(Good luck with that one over the next few years, assorted commentators.)

At 6 pm, Maria’s compatriot Andrea Petkovic took on Misaki Doi, whose ranking has continuously belied her best tennis throughout the year. The Japanese had several higher-ranked players on the ropes over the course of the season but often couldn’t quite pull off the big upset — but in Luxembourg, the World No. 92 turned over another page as she ousted the No. 4 seed in three tight sets, 7-5, 2-6, 7-5, finishing strong in the opener and the decider.

“I didn’t use my chances at the very end, committed some unforced errors when I really should’ve been breaking her serve and she really went for her shots towards the end,” Petkovic assessed.

Although there were a couple of highly contested line calls towards the end of the encounter, the German explained that’s not where the match was lost. 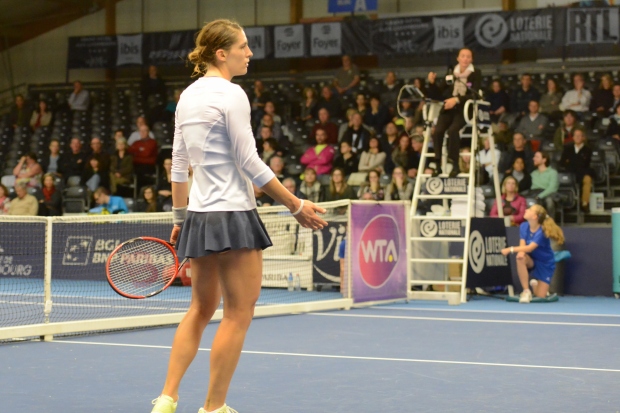 “Whether a couple of her shots landed on the line or next to it is debatable but without Hawkeye it’s just tough,” Petkovic said. “She went for the lines, she played well and I don’t think I lost the match at *5-6 in the third set. I lost it when my level dropped off towards the end of the opener.”

At the end of a late evening, German fortunes turned as Mona Barthel took out No. 6 Sloane Stephens in two sets, 6-4, 7-5. Particularly in the second set, Barthel’s serve held up well — even though her motion has undergone some changes to become much more abbreviated than previously. The American didn’t play badly, but too often the 25-year-old Barthel came up with the shots when it mattered and coasted through several of her service games, putting the pressure right back on her opponent.

Barthel and Maria will face off in the second round, ensuring the German fans will have a rooting interest for at least two more rounds.

Tomorrow, Ivanovic and Errani both get their campaigns underway and keep your eyes peeled for a couple of TTI exclusives with players and on the tournament itself!