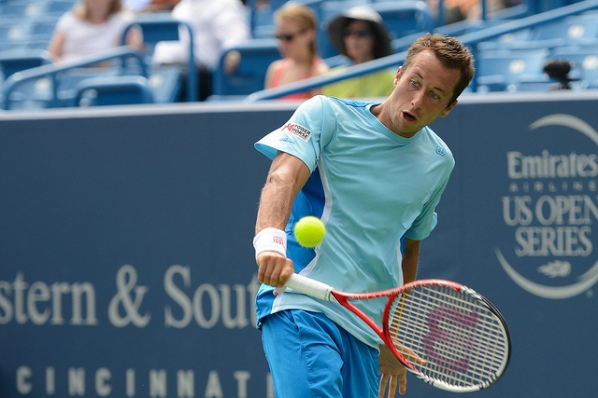 Philipp Kohlschreiber gave Roger Federer all he could handle in Basel last week, but troubling times lay ahead for his home country in men’s tennis. Photo: Christopher Levy.

When the ATP’s elite start swinging their rackets at the final Masters 1000 event of the 2015 season in Paris, players from over 20 countries will be competing in the singles main draw of the penultimate men’s tournament of 2015 — but one notable country is missing. For the first time in 27 years, no German will be in the main draw the long-standing indoors event at the end of the season. René Denfeld looks at the complicated state of the men’s game in his home country.

“I had the feeling like the crowd really had my back and I think that made a difference…It might sound a little cheesy but that’s the way it was.”

Little did Roger Federer know after his three-set victory of Philipp Kohlschreiber at the Swiss Indoors, the crowd wasn’t the only thing gnawing at the German veteran in their second-round match.

For most of the match, Germany’s No. 1 ATP player had been able to keep a lid on the cauldron that is Basel’s St. Jakobshalle, never allowing the partisan crowd to start bubbling over for their hometown hero. As the final set got underway, however, Federer was able to lift not just the crowd but also his first serve percentage from a below-average 40 percent to a staggering 90 percent. What appeared to be inevitable soon occurred when Kohlschreiber served to stay in the match at 5-4 in the decider. The 17-time Grand Slam champion broke his opponent’s serve and defeated the German for the 11th time in their 11th meeting.

“As the match went on, maybe he got a little tired or maybe he was carrying a little injury,” Federer said on Thursday evening.

Federer’s observation didn’t appear to carry too much weight a couple of days ago after their Basel meeting but as the tour moves on to one of the last big stops on the season, it gained some significance. As an MRI check confirmed according to a report by Sport1.de, Kohlschreiber is allegedly suffering from a partial tear in his hamstring, ruling him out of his final event of the year. As a result of the 32-year-old’s withdrawal from the main draw and with Michael Berrer and Jan-Lennard Struff losing in qualifying, there won’t be a German man in the main draw of the BNP Paribas Masters.

Kohlschreiber resigned from #Bercy And Struff and Berrer lost in Qualies. So no Germans in Paris for the last Masters1000 of the season.

At first that might sound surprising, but it’s a development that has been looming for a while.

When 2015 is done and dusted, Germany won’t have a player ranked inside the ATP’s Top 30. While he remains the undisputed No. 1, Kohlschreiber has had a year marred by little injuries and inconsistencies; more often than not when he was striking the ball well, the Bavarian found himself getting the short end of the stick. In Halle, he drew Federer in the first round while two weeks later at Wimbledon, he faced Novak Djokovic in his opener.

There have been highlights for Kohlschreiber this season, as he finished runner-up in Munich to Andy Murray and won his “home” tournament in Kitzbühel — but particularly at the big events, things just didn’t fall into place for the one they call “Kohli.”

Next year is going to be an interesting one for the veteran, who is currently hovering around the edge of being seeded for the Australian Open. Several of his treasured post Wimbledon clay events have been lumped together into just one fortnight in July and a lot of German eyes will be on Kohlschreiber when it comes to Rio 2016, particularly after his last-minute withdrawal from London 2012 and having skipped Beijing 2008 due to a torn hamstring. Scheduling next season will be a particularly important challenge for the 32-year-old. 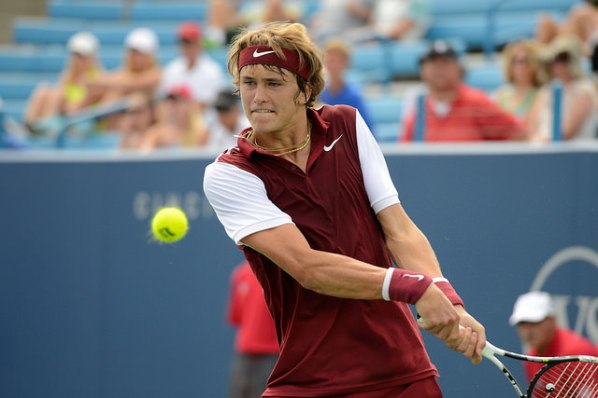 Going down the rankings, the only other German ranked inside the Top 100 is Alexander Zverev. The 18-year-old first made heads turn during his run to the semifinals at the ATP 500 event in Hamburg last season, and 2015 has seen the younger Zverev go through what would best be described as a year of many learning experiences. While he had tough losses in Australian Open and Roland Garros qualifying, he picked up his first Grand Slam main draw victory at Wimbledon before a grueling five-set loss at the hands of the aforementioned Kohlschreiber in the first round of the US Open. Majors aside, this season has seen dips and climbs in the rankings as well as his form — just as one would expect from someone in his first full year on tour.

Zverev has a lot of the prerequisites to excel over the next decade and considering his height of 6’6″, he moves much better than he has any right to. It doesn’t come as a surprise that many have proclaimed the youngster as the bearer of “Tennis-Deutschland’s” hopes on the men’s side, but it’s a heavy burden to carry given its drought-stricken condition. The 18-year-old is inherently hard on himself and his performances without the added external pressure. Zverev still needs time to round out his game, become a better match player and tame his temper, but ironically, the state of men’s tennis in Germany probably needs — and wants — him to be all of that today rather than tomorrow.

Looking outside the Top 100, no less than four men are sitting within 60 points of turning their ranking into double digits. Jan-Lennard Struff and Benjamin Becker had terrible stretches between the Australian and US Opens — some of them marred by injury — but both men found some better tennis again over the past couple of weeks. At 25, Struff will still be around for quite some time but at the age of 34, the question is how long Becker will continue to chase yellow balls around the globe. At one year older, Michael Berrer notched up some notable wins this year — defeating Rafael Nadal and qualifying for three out of four Slams — but the lefty announced 2015 was his final year on the circuit. Finally, the flashy Dustin Brown has been much talked about during Wimbledon and the grass court swing again but his unpredictability will probably continue to define him — for better or worse. 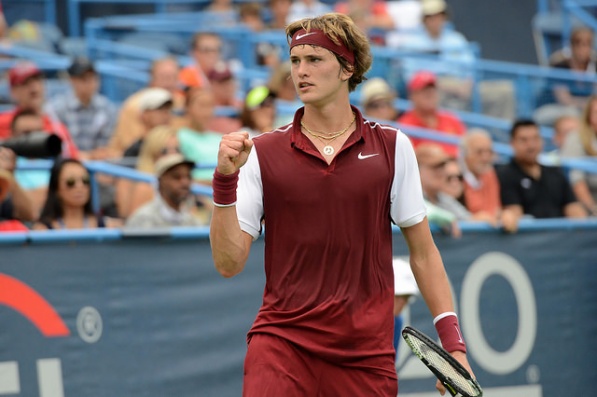 Elsewhere on the veteran front, former Top 20 player Florian Mayer is currently experiencing the difficulties of returning from a long injury layoff at the age of 32 and Tommy Haas’s 2015 felt more and more like a farewell tour.

In a way, it’s unfortunate that so many of the German men seem to have had a rough season or two at the same time with Tobias Kamke struggling to find the ripcord that could stop his fall or Peter Gojowczyk having a season of sophomore blues after a career-best year in 2014. If it’s the smaller things that count, however, then it was good to see Daniel Brands back in the main draw of an ATP event and making the quarterfinals in Valencia, in addition to Alexander Zverev’s older brother, Mischa. Both have had lengthy injury or health-related layoffs and at 28, there’s still more than a few years of good tennis left in both of them — particularly considering today’s climate where most players appear to hit their peak in their late 20’s.

It’s probably not going to be an easy next 12 to 24 months for men’s tennis in Germany unless Kohlschreiber makes radical changes to his schedule and fulfills his potential or Zverev’s development occurs in quantum leaps. A best case scenario would be having five players in the Top 100 at this point next year — but to expect explosive improvements in performance across the board would be foolish, particularly given the lack of players aged between 18 and 25 (#lostgeneration) when such advances are the most likely to happen.

There are young prospects such as 15-year-old Nicola Kuhn, who was this season’s junior Davis Cup MVP — or the aforementioned Zverev, who could herald a next wave of German players coming through — but it is not going to happen overnight.

It’s going to take a while, maybe even a long time, and in a country where interest in (men’s) tennis has become somewhat sluggish outside of slams or events on home soil, a “long time” is not necessarily what the doctor — or rather, tournament organizers and federations — ordered.