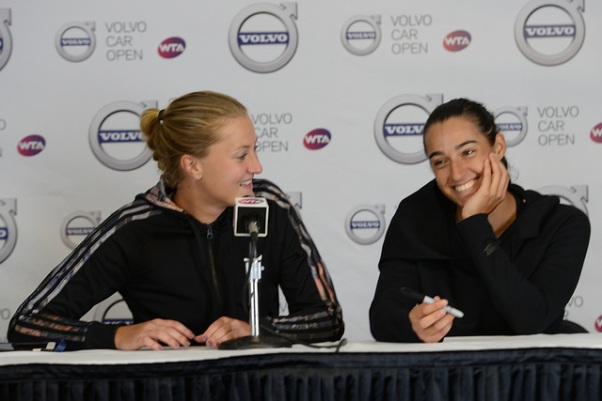 In yesterday’s first part of our double feature with Caroline Garcia and Kristina Mladenovic, the French pair explained how they got together, with the Olympics as well as the French crowd in mind, and didn’t hold back on their disappointment about the print coverage of their Fed Cup Semifinal win against the Netherlands. In this second part, the team of the month talks about their improvements since joining up, friendships in doubles and the double edged sword that’s social media.

Kristina Mladenovic and Caroline Garcia got off to a strong start in 2016, but it wasn’t until April that the two Frenchwomen really hit the ground running — and Garcia herself sees the improvements the pair have made over the course of the past few months.

“I think we played the best level in Charleston and in this week [in Stuttgart],” Garcia explained.
“We start very well but maybe we [were] not playing like, always like a doubles team. Now we are doing more combinations and crossing, and we are learning also how the other one is moving — so sometimes we don’t speak to each other but we can cover it, so I think we feel more and more like a team on court. At the beginning, it was also working very well but I think it’s better doubles game now and we can see today we beat one of the best teams [Hingis and Mirza], and last week in Charleston also against Bethanie [Mattek-Sands] and Lucie [Safarova].”

However, even though their doubles success has been notable, singles still remains a focus for the duo — but doubles is certainly more than an adequate training, particularly since it creates the pressure environment that only exists when the scoreboard is ticking next to the court.

“People were asking me if it isn’t [sic] too much for my singles to always commit and play doubles,” said Mladenovic. “Personally from my opinion, it’s the best practice I can have for my singles. For example, I’m working on a few things with my coach, working on my serve, the last couple weeks and there’s no better practice than to come out in important doubles matches like this and challenge myself like, ‘Let’s do it!’

“I have now one serve exactly the one I served at 8-6 down the tee. I mean, I can do hundreds of serves at practice but nothing compares to the one with pressure. You can put all pressure you want on yourself in practice, you know, bets and whatever but you know it’s not the same.”

While both Frenchwomen have fairly similar game styles — sitting comfortably in the aggressive, baseliner spectrum of tennis — they handle pressure situations differently. Mladenovic has shined in some of the biggest moments of her career in front of her home fans, upsetting Li Na and Eugenie Bouchard in the past two years on Court Suzanne Lenglen at Roland Garros, but Garcia’s struggled to fulfill expectations at home after pushing Maria Sharapova to the brink in as a 17-year-old in 2011. Last year, she fell in her opening round — after being put on Court Philippe Chatrier against Donna Vekic on the opening Sunday — even if that court assignment wasn’t exactly on her wish list.

However, playing doubles also means learning from another, and it helps when you’re getting along — well most of the time, anyway.

“I think it definitely helps, but when you see Peng [Shuai] and Hsieh [Su-wei] who was fighting outside of the court and they won Grand Slams,” Garcia laughed. “For me, it definitely helps to play with Kristina and I think when you’re friends you can speak freely to your partner and give her some advice — then when it’s difficult, you push her even more to be better and better and when the other one is playing great, you follow her way!”

That closeness also helps off-court when the going gets rough. Both Mladenovic and Garcia found themselves in social crossfire in recent weeks, as Mladenovic was openly frank when it came to the “causa Sharapova,” while Garcia dealt with a slanderous moment in Charleston during her match against Irina-Camelia Begu — which was reported as fact by several news outlets. However, the WTA later issued a statement saying that there was no evidence to the accusations.

“I was really in love with Twitter and social media,” Garcia reflected. “I had an experience that said, ‘Maybe you shouldn’t be in love with it.’ I didn’t do anything and it’s just people took something from one guy who said something on a forum and [there’s] a thousand, five thousand comments on my Facebook page…After this I said: ‘Okay, I need to take my distance, I learned my lesson,’ and people can talk, they can talk freely, I don’t mind but it’s something that hurts you inside and…you can’t control this thing but people don’t realize how they can hurt people. I don’t say I’m nice always — ”

“You didn’t do anything — what are you talking about?” Mladenovic interjected before Garcia continued, saying sometimes players get nervous and throw a racket. 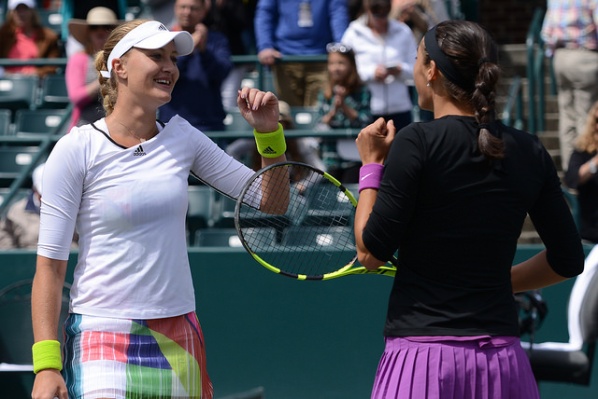 “Yeah, exactly, that’s my thought as well about it,” Maldenovic continued. “I’m not the biggest fan but why I’m super active because that’s the best way where actually you can control your personality and you know, show exactly the inside because I put myself in a fan’s position: when I was younger, I would love to know like about my idols, something else about tennis or about practices and stuff!”

“About Maria’s statement, there is nothing I regret about it. It’s totally what I think and I just think that it’s a bit unfortunate that so many players and people would think the same thing like me, [and] just wouldn’t speak because they were scared of obviously the millions of fans that she has and then obviously are haters now of mine, of me…I was ready to receive like hundreds and hundreds and thousands of like hate messages because of what I said about Maria, but that’s what I think and we all can express ourselves.”

Mladenovic found herself on the receiving end of more than just a few messages that hit below the belt, but continued to explain why she said what she said rather than backing away from it.

“We are both very young, and we are fighting for integrity and great image — we both grew up watching her and we are on the tour now with her, and my comment was also about how disappointed I am because I was not personally in love with her personality — that’s exactly what I said — but I was respecting her so much for the champion and career she had and just to know about this news of course it was like a doubt about all this stuff. That’s the…magic of social media.”

Mladenovic and Garcia have certainly captured their own kind of magic on court this spring, as their quest to build on their winning ways will continue in Madrid and Rome — ahead of Roland Garros.