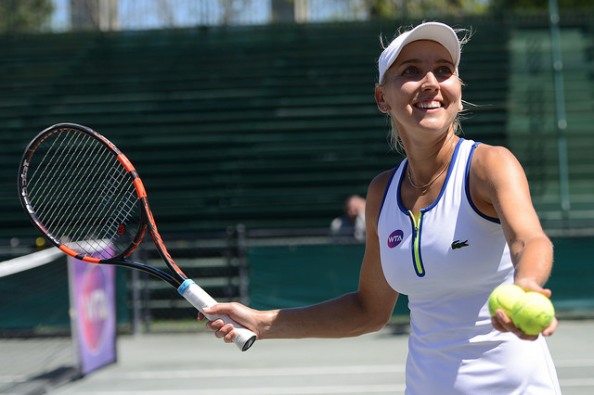 It’s been a a see-saw past two years for Elena Vesnina but since the beginning of 2016, the Russian veteran’s ranking has been in a real upward swing. After dropping outside the Top 100, strong runs in Doha and Miami started Vesnina’s season before she became the first-ever qualifier to make the final at the Volvo Car Open in Charleston. René Denfeld caught up with the 29-year-old, who made it through qualifying in Madrid with the loss of a mere six games to talk all things singles, doubles, Olympics and….football.

Elena Vesnina came to the Caja Magica riding a wave of confidence, having won 11 of her last 13 matches in Miami and Charleston. With her renaissance in form one of the feel-good stories on the WTA in 2016, it wasn’t a major surprise to the see the experienced Russian pick up two convincing wins to move forward into the main draw.

“It wasn’t that easy a match with the score because Silvia is playing at home and she’s had a great run in Bogota,” Vesnina said after her first round qualifying win in Madrid, when she defeated the wildcard Soler-Espinosa 6-3, 6-0 before posting an identical score against Aliaksandra Sasnovich. “I was really focusing on my game today and I’m really happy that I won it in two sets.”

After her run to the championship match at the Volvo Car Open, the 29-year-old found herself back in qualifying at the Mutua Madrid Open — even though her singles ranking rose up to No. 54 on the back of her second runner-up appearance in Charleston. However, Vesnina didn’t really mind having to play two extra matches — on the contrary, the two-time doubles Grand Slam champion treated it as a welcome opportunity to tune up for the red clay.

“Yeah, the entry list closed six weeks before and my ranking wasn’t good enough to be in the main draw,” she said. “I had some time off after Fed Cup — I stayed at home, I practiced, I had some time to recover a bit, because after Indian Wells, Miami and Charleston run I was feeling a little bit tired — like I need this break and now I feel fine again!

“I’m really enjoying myself of court, and even [though] I know I have to play through the qualies, I’m not feeling like it’s something bad for me. I’m feeling like it’s really good for me, so I have some more matches and especially at the beginning of the clay court season — the red clay court season you need these matches, so I’m just trying to think match by match improving my game on the clay.” 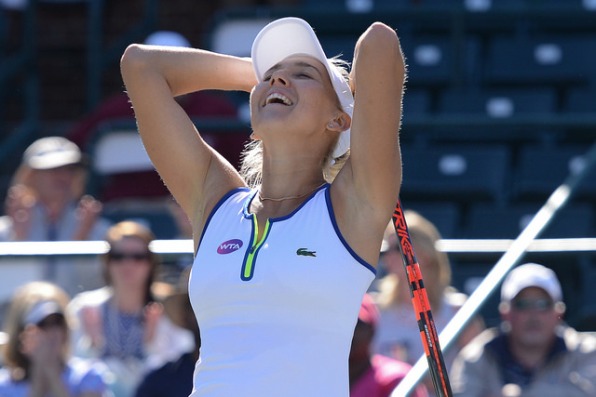 Two weeks ago, Vesnina — who’s been part of two Fed Cup championships for Russia — led a young team into the tie against Belarus; if not by ranking, definitely by experience — and Vesnina is enjoying watching the next generation making strides forward and gaining more experience.

“It was fun, it was really fun — we have really good girls coming up and I’m really happy about that because all of them are very talented and very nice and sweet girls,” Vesnina said. “I was laughing with [Daria Kasatkina] the other day that Margarita Gasparyan — she’s 22 and I said that when I was 22, everyone was saying that I was a veteran already on the team because I started playing quite early.”

Although she didn’t play singles and the Russian team didn’t come away with the win against a Belarusian team led by Victoria Azarenka, Vesnina was still a vital part off the court — as both her and captain Anastasia Myskina shared some of their Fed Cup wisdom regarding the unique pressure of the format with the up-and-coming players.

“Yes, sometimes [they were asking for advice],” she said. “In the Fed Cup, they were asking me a little bit before the match like because they’re not used to have that much attention from the media especially cause they’re No. 1 and No. 2 in the team. I told her [Kasatkina] a couple of things that I was doing with myself and she said it actually helped her.”

Vesnina and Kasatkina have been a formidable doubles team early on in 2016, which included snapping World No. 1 Sania Mirza and Martina Hingis’ 41-match winning streak in Doha. This week, however, the 29-year-old is back to playing with her long trusted partner Ekaterina Makarova — and they’re reuniting on the court this week in Madrid as the No. 8 seeds.

“When I started playing with Dasha, I told her that I’m waiting for Katya [Makarova] to recover from her injuries because we didn’t play…anything since Wimbledon last year,” Vesnina said. “So that’s a long break and I was waiting until she’s going to get better, you know because, it’s not easy to play with an injured partner.

She was feeling a little bit down, so I gave her some time and I started playing with Dasha, knowing that just in case, we can play Fed Cup doubles and maybe Olympics doubles, I mean it was also one of the options but of course, Katya was the priority because we played so many great tournaments — we had so many good wins and such great memories and we were laughing that exactly four years ago we started here in Madrid and exactly the same place; it’s an anniversary. We’re going to start again here in Madrid, so hopefully it’s going to work for us well.”

Vesnina has always been one player who’s played a full singles and doubles schedule, and doubles always remains a possible confidence booster for the Russian veteran — especially when singles doesn’t go according to plan.

“I’m always enjoying playing singles and doubles and I really think doubles helps a lot to your singles game,” she said. “Even when you have a bad week on your singles, you still can go back on the court in doubles and get some wins under your belt.”

Over the next few weeks, a lot of Vesnina’s focus will be on singles however because Russia — just like Germany and the United States — have a real race for the Rio Olympics on their hands. Several players are pushing hard to get into the top four of the national rankings to be considered for the Olympics in singles; at No. 54, Vesnina is the No. 8 Russian.

“Of course, we know that it’s very close for all of us — I have to do really good here to get a lot of points here and then Rome and then French Open to have a chance and play in singles,” Vesnina, who is approximately 400 points behind Russian No. 3 Makarova, said. “I’m not trying to think about it. Of course, it’s a little bit in my mind but first of all I just want to to play good, like I was playing for the previous few weeks, and getting more matches and more wins under my belt and we will see what’s going to happen.” 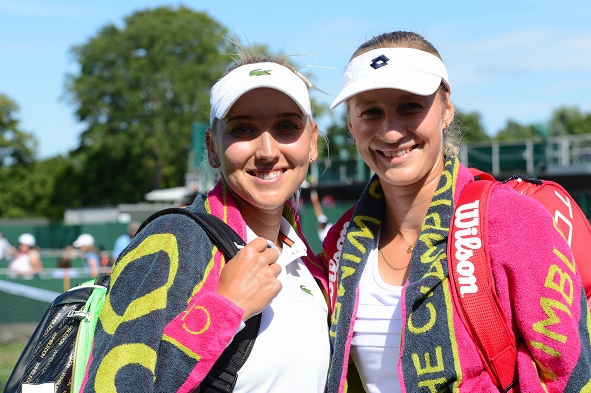 It’s not all about tennis for Vesnina in Madrid, however, as she arrived fairly early to prepare for the altitude in the Spanish capital; the extra times also gave her the chance to the attend the Champions League semifinal match between Bayern Munich and Atletico Madrid.

“It was great, I really enjoyed the atmosphere. I never been on such a big and important match, football match and when I saw all the crowd, I felt so embarrassed taking pictures cause I was the only one who was taking pictures,” Vesnina laughed. “We went actually with Bethanie [Mattek-Sands]; we were sitting in a different section than her and she said exactly the same because people, they were watching for two hours, just focused on the football, just on the field, nothing else.

“They were not eating, they were not talking — they were just watching and jumping with the scarfs. It’s amazing to see how fans are giving their hearts to their teams and it was a great win for the home team. I was not cheering for anybody because I’m not a fan of both team but I know more players on the Bayern side by name than of Atletico, so I was like, ‘Ribery! I know him!’ or ‘Mueller, I know him!’ So yeah, it was good fun!”

“I think it really helps your brain to relax and see something else than tennis courts and gyms and the hotels, so yeah it’s just great. For so many years, we’re traveling the same tournaments, year by year, week by week, and for me it was a new experience, so I went; it actually was my dad’s idea, first of all, he was like, ‘Let’s go, let’s go and watch,’ so I’m really happy that he wanted to go, so both of us really enjoyed our time together there.”

Vesnina will open her singles campaign in Madrid against Jelena Ostapenko on Pista 7 tomorrow; it will be their first meeting.