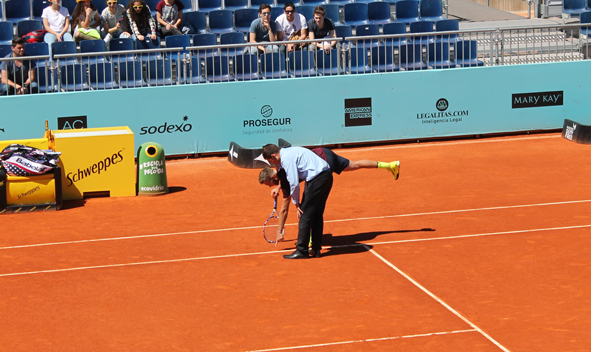 With first round matches ending and second round matches beginning, today’s schedule of play in Madrid featured a whopping 15 ATP matches, with last year’s finalists Rafael Nadal and Andy Murray entering the action on the ATP side later that day.

Play kicked off with four men’s matches at the same time and particularly the encounter between Jack Sock and Benoit Paire brought plenty of fireworks — including arguments with the umpire, balls flying out of the stadium and rackets being knocked at the back of the wall.

Afterwards, Sock was happy to get a win under his belt but admitted that the level throughout the match wasn’t sky-high at all times.

“Tennis wise, I mean — for me it wasn’t my best day, obviously it’s never easy coming to my first match in Europe on the clay after being her for a few days playing Tuesday but happy to get through obviously,” he said. “Tactically I could’ve done a few things better, I played a lot of balls to his backhand which is obviously his strength — he’s got an unbelievable backhand.”

For Sock, Madrid is his first tournament since his loss to Juan Monaco in the final of Houston about a month ago — as the Nebraskan’s taken some time off to recover from the first few months of 2016.

“I just went home and rested — definitely got the motivation and freshness to go out and compete again and [I’m] definitely happy to be over here.”

At the same time, Nick Kyrgios took out Guido Pella in straight sets; as the Aussie is coming off of a semifinal appearance in Estoril, he had to make some adjustments in switching from windy conditions at sea level to sunshine, warmth and altitude in Madrid. However, he’s paid that no mind, as the latter helps him strengthen his biggest weapon — his serve.

“It’s great to be back here playing again,” Kyrgios said after his match. “Obviously last year, I had the biggest win of my career [against Roger Federer]. I knew that I could play well here — it’s great serving conditions, [and] it’s obviously a lot different to Estoril, but [I] had a good session this morning. Today’s match was probably one of the best matches on clay I played. He played unbelievable…and I played really well — it was a high level match, I thought.”

With his 7-6(7), 6-4 win over Pella, Kyrgios sets up another meeting with Stan Wawrinka in the next round — an encounter that’s been the talk of the tour since the summer of last year. The pair recently met in Dubai, but the match didn’t live up to the expectation that were built up in advance.

“Last time I played him, I wasn’t playing great,” Kyrgios said, of the match in which he retired trailing 4-6, 0-3. “He was playing some great tennis, obviously won that event. I know it’s going to be tough — he’s comfortable on clay, he won one French Open, so I know that I’m definitely the underdog going into it, but I’m not going to change anything. I’m going to serve well and we’ll see how it goes.”

“I actually hurt myself playing basketball…so I had to sort of be a bit — I didn’t get as much time on clay before as I wanted but it’s actually worked out all right. I feel fresh, I’m moving well, I feel good, so I think less is more. By not doing too much, I actually feel really well physically now and I think it showed today.”

Meanwhile, Gael Monfils didn’t just overcome a returning Kevin Anderson in his opening match, but also an ankle injury midway through the second set. Afterwards, Monfils acknowledged that his foot was still hurting and he’ll have to see how he was going to be for the next match. For Anderson, the 6-6-4, 6-1 setback wasn’t quite the result he had hoped for in his first match in months, but the South African was happy to return to the ATP Tour after not having been able to play since Delray Beach due to a number of injuries.

“My movement was okay — obviously just too many mistakes, [and I] need to sharpen up a little bit,” he said. “[He’s a] tough opponent in my first match back — it was almost a little bit tough; he looked like he was in quite a bit of pain at the end of the first set. He picked it up suddenly at 5-4 and maybe caught me a little off-guard. Just in the second, [I] just sort of missed some more routine balls…but [I’m] just glad to be back and get through my match from a physical standpoint pretty much unscathed.

“I mean, [there was] not a lot [of time to prepare] but that’s part of the process. It just feels good to be a back and right now just trying to improve one at a time. Right now, it’s tough because it’s the middle of the clay swing but it’s just something you have to deal with.”