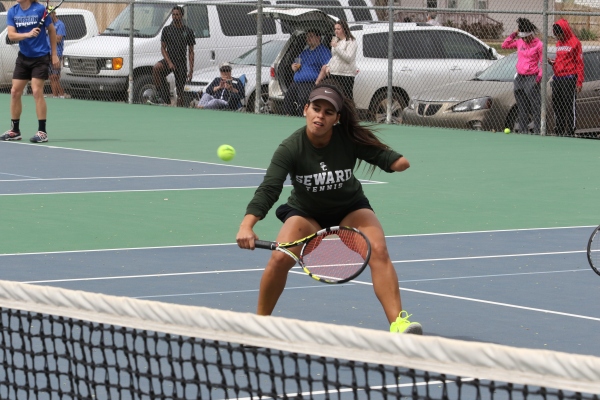 In tennis, pre-serve routine and rhythm — and the superstitions behind them — are almost as important as forehands and backhands.

Richard Gasquet seeks out the same ball after every point he wins.

John Isner bounces the ball between his legs before he fires down his booming serve.

Maria Sharapova turns her back to the court, collects herself, bouncing the ball deliberately.

However, one collegiate tennis player is rewriting that script, and paving her own way in the sport.

Enter Thalita Rodrigues — whose routine and rhythm on what’s widely considered the most important shot in tennis, the serve, is as unique as they come. When she toes the baseline to serve, Rodrigues — a freshman on the Seward County Community College tennis team in Liberal, Kansas — carefully balances the ball on the tip of her racket’s frame, before firing it into the air above her head.

Rodrigues’ routine, however, came to be not out of superstition, but out of necessity.

The Brasilia, Brazil native was born without the lower portion of her left arm beneath the elbow, as a result of the rubella virus that infected her mother while she was pregnant.

Undaunted, there was never a doubt that Rodrigues would get on the tennis court. The sport was always a family affair for her, as she says that everyone in her family plays; she started playing when she was eight years old after being introduced to the sport by her father and grandfather. Rodrigues thrived in the sport in her home country, as she competed at the national level, had the opportunity to meet three-time French Open champion Gustavo Kuerten, and was one of the best players in Brazil’s national rankings in 2012.

So how exactly does a tennis player from her nation’s capital and a population of over 2.5 million people, end up deep in the heartland of the United States? Liberal is about 200 miles away from Kansas’ capital of Wichita and pales in comparison in size — with a population of just over 20,000.

It starts with the program’s head coach, Greg Owen.

“I have a great contact in Brazil — he sent me several players’ videos and I was very impressed with Thalita,” Owen said. “I immediately knew that I wanted her to be a Saint.”

Owen’s desire to have Rodrigues wear Seward’s green and white went hand-in-hand with her desire to continue her tennis career at the collegiate level and broaden her horizons and experiences.

“I have always wanted to come to the United States to play tennis, to study, and learn English,” she said.

While every student embarks on a journey of adjustment and self-discovery upon entering college, student-athletes in particular face a whole host of other challenges in regards to scheduling their day-to-day activities and adjusting to college life. Rodrigues has had to face all that and more — as she’s doing that adjusting over 5,000 miles away from home.

However, family is what got Rodrigues into the sport and it’s her family — both her true family and her tennis family — that’s made the transition easier and led to her thriving both on and off the court.

“My father talks a lot with me before and after matches, helping motivate me,” she said. “My mother and my sisters give me all of the support I need. I always know that even if I am so far away, they are always there for me and only a phone call away.

“It has been a difficult adjustment because of the language barrier — I like it though!  My teammates are very supportive of me and the town of Liberal is obviously different from Brasilia, but it is nice as well.”

Rodrigues has helped the Saints reach new national heights this year, as the team is currently the No. 6 junior college program in the country according to the Intercollegiate Tennis Association’s rankings. Individually, she cracked the top 10 in the ITA’s JUCO women’s singles rankings on April 21, and currently holds a national ranking of No. 10. She boasts a 23-3 record in singles this season, including a 19-3 mark at No. 2. She and primary doubles partner Nthabiseng Mogopodi — a native of Gabarone, Botswana — are the No. 11-ranked team in the nation and have posted a record of 19-3 this season, including a 15-3 mark at their primary position at second doubles.

As an institution, Seward has had its share of notable athletes come through its various athletic programs; in the past seven years, Seward has seen 23 players named All-Americans across all sports — and two from women’s tennis, Paula Lopez and Paula Coyos, were the program’s first-ever two-time ITA All-Americans last year. Rodrigues hopes to join the illustrious list of Saints’ alumni in college or even professional tennis, and believes her biggest strength is not her attacking forehand or her one-handed topspin backhand — but is instead something intangible.

“I feel like I am very strong mentally on the court and my drive is very high to succeed,” Rodrigues said. “I feel like on the court my game is well-rounded, too. I think that my experience in overcoming things helps me in some situations, but everyone has to overcome things in their lives, so I don’t think that it is a lot different.”

“I could see based her video that she had all the shots and a great rhythm to her game,” Owen added. “What I did not see is all the other special qualities she has. She makes her teammates better, her effort and attitude are contagious.

“She brings it all to the team. [She has a] great energy, great work ethic, great fight, great attitude. Her biggest strength is her will to win. She has tremendous footwork and tennis IQ but her will to win is her greatest strength.”

After coming in second in the NJCAA Region VI Championship — which Seward hosted on their home courts at the end of April — Rodrigues and the team are headed to Tyler, Texas for this year’s edition of the NJCAA National Championship this week. While she has her sights set on finishing her freshman tennis season strong for Seward, Rodrigues’ sporting summer won’t be finished when she returns home: the Rio Olympics will be just around the corner.

“It is really cool,” Rodrigues said about Olympics. “It is great for the country. All Brazilians are excited for the competition to be in Brazil this year.”

As the tennis world’s elite will also gather in her home country for the Games this August, Rodrigues says that one player in particular in that group is her favorite.

“Serena Williams,” she said. “She is an amazing player. She plays so strong and she is an inspirational player.”

Rodrigues might’ve been inspired by the WTA World No. 1 to get to this point in her career, but should she continue on her path of success, she might just be the one to pay it forward — and inspire others.

In addition to Thalita Rodrigues and Head Coach Greg Owen, TTI would like to thank Roy Allen, the sports information director at Seward County Community College, for his time and assistance with the reporting of this story.