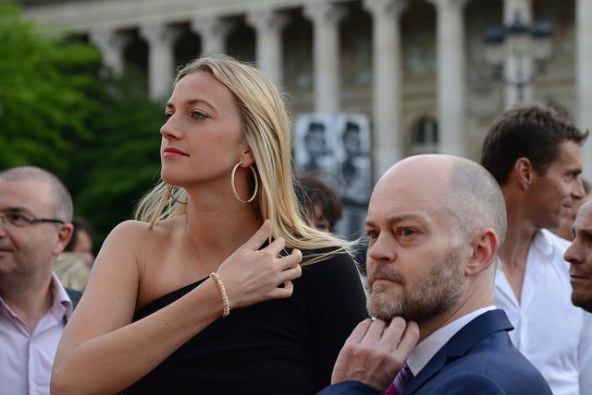 Before the action gets underway on the orange terre battue at Roland Garros, many of the ATP and WTA’s finest took to a different orange surface — the orange carpet — at the annual players’ party on Thursday night. TTI ranks the best of the best!

All photos in this post courtesy of Christopher Levy. 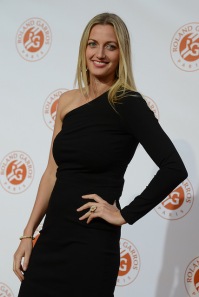 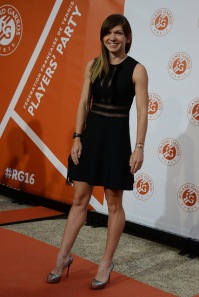 Black proved to be a popular color on the orange carpet, but there was no chance of any fashion fouls between Alizé Cornet, Petra Kvitova and Simona Halep. The Frenchwoman and two of the WTA’s Top 10ers each worked their own version of the little black dress, with Kvitova opting for — and completely rocking — the non-traditional “one-shoulder” look.

While Cornet and Halep opted for more classic looks, the Romanian’s cutaways on the waistline and silver stilettos certainly added an expected twist to this wardrobe staple.

There’s nothing better than springtime in Paris, and perhaps Ana Ivanovic and Elina Svitolina each took “April showers bring May flowers” to heart when picking their looks for the orange carpet. The Serb and Ukrainian each put their own spin on a pair of floral looks for the night — with Ivanovic opting for a darker, more mature look in comparison to Svitolina’s youthful and vibrant stylings.

Doubles partners Vitalia Diatchenko and Galina Voskoboeva worked contrasting styles on the orange carpet, with the Russian rocking a teal and black number and the Russian-born Kazakh embracing her dark side — in more ways than one — with a bright red jumpsuit and lipstick. 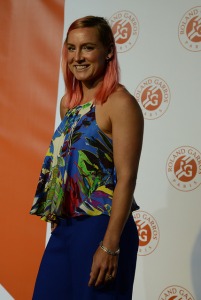 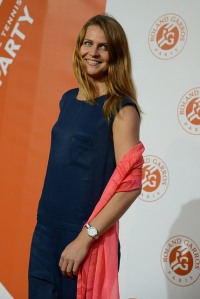 Never has a color palette been more diverse than this  — as Bethanie Mattek-Sands and her doubles partner Lucie Safarova, as well as American Nicole Gibbs all opted for varying shades of blue on this night. Ever the sartorial maven, Mattek-Sands’ look is full of color and pops up top, while Safarova chose a more traditional option with a high-necked, navy jumpsuit.

The real winner in this trio, however, is Gibbs — in the city that loves its fashion, this geometric number wowed both in Paris and back home across the Atlantic.

Rafael Nadal and Jo-Wilfried Tsonga both recognized it’s not all that easy to dress up a basic black tuxedo, so the nine-time Roland Garros champion and French favorite each opted for a different look for their players’ party threads — with the Spaniard even sporting jeans compared to the Frenchman’s three-piece, navy ensemble.

The Ladies in Red 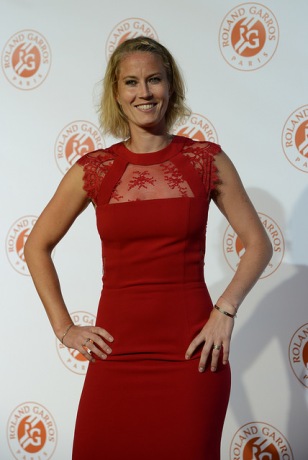 Two women at opposite ends of the career spectrum chose a similar color scheme, as young Russian-turned-Australian Daria Gavrilova and Frenchwoman Mathilde Johansson — who announced her retirement from the sport after losing in qualifying — each picked a red number for the night’s festivities. Gavrilova tied the look of her red and white number — with black trim — together thanks to a black blazer and bag, while the lace neckline on Johansson’s dress makes an otherwise traditional look pop.

Best of the Rest 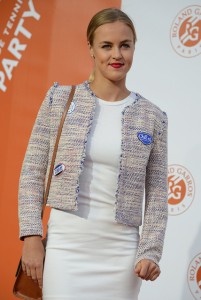 This WTA trio of Yaroslava Shvedova, Anna Karolina Schmiedlova and Carina Witthoeft ran the table of players’ party looks — with the Kazakh opting for the classic look of a leather jacket and jeans; Schmiedlova channeling her inner politician (complete with tweed jacket!); and Witthoeft ramping up the glitz and rocking a shiny, v-necked gold number.

What was your favorite look? Sound off in the comments!